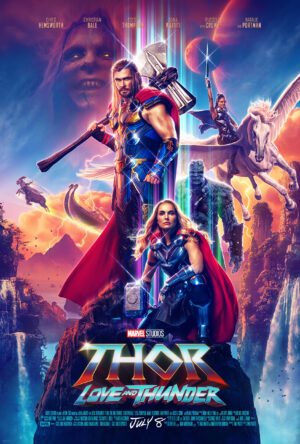 Marvel
The fourth Thor movie has too much comedy and a subpar plot, making it one of the lowlights of the Marvel Cinematic Universe.

Of all the heroes of the Marvel Cinematic Universe (MCU), Thor’s journey is arguably the most enthralling: The arc of the character’s transformation, from an egotistical and selfish warrior to a heroic and charismatic goofball, has not only made for a captivating story but fascinating views. His wacky yet compelling background has resonated with fans, reshaping their perspective on an MCU character who previously was not perceived at the same level as beloved superheroes Captain America and Iron Man.

Not only is Thor, played brilliantly by Chris Hemsworth,  arguably one of the most popular and beloved among the rest of the Avengers, but he has also managed to outlast most of them. With the July 8 release of “Thor: Love and Thunder,” Thor is officially the only MCU character with four standalone movies.

“Thor: Love and Thunder” is a spiced-up romantic comedy film with nonstop action and a petrifying villain who wants to kill all gods. Hemsworth fully embraces self-parody with his character, and as if the last three “Thor” movies weren’t crazy enough, this one has managed to break the limit.

However, the movie did not even come close to meeting the high expectations of excited fans.

For starters, the movie’s runtime is too short. There were ambitious goals set for this movie, but there wasn’t enough time dedicated to expanding the convoluted plot. The movie, less than two hours long, is the shortest MCU movie since the release of “Ant-Man” in 2015, making it feel rushed from one scene to the next. In addition, the transitions between scenes are rough, leading to surprising and unsettling shifts in the movie — concerning for a project attempting to balance both drama and comedy.

Similar to its predecessor “Thor: Ragnarok,” “Thor: Love and Thunder” is filled with humor. This time, though, there are too many stale jokes and nearly everything, even death, is humorized to the point where genuine plot points focus more on the next comedic one-liner than grounding themes.

The movie also fails to give crucial background to some of the main characters, specifically Jane Foster, portrayed by Natalie Portman, and Gorr the God Butcher, portrayed by Christian Bale. While the idea of Foster becoming “Mighty Thor” is rooted in one of the most critically acclaimed Marvel Comics storylines, her time as the heroic alter-ego is no more impactful than Pepper Potts’s brief time in the Iron Man suit in “Iron Man 3.” A longer film would’ve allowed to not only provide an explanation of her troubles and history with cancer but also allow for Jane to develop as “Mighty Thor.”

With the success of “Thor: Ragnarok” and the events of “Avengers: Endgame,” many fans expected a strong character comeback for Thor. What they got instead was a movie that was too comical, disorganized and in essence, pointless.

Between a lackluster villain and a flat character, the Thor franchise seems to have stalled. Of course, given its financial success, we know there will eventually be another installment. Let’s hope the next movie fixes these glaring flaws.