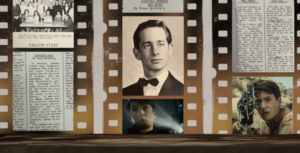 Photo by Stephanie Sun
Class of ‘65 alumnus Steven Spielberg’s new movie, “The Fabelmans,” covers much of his experience at the school.

Permalink
Class of ‘65 alumnus Steven Spielberg graduated from the school, but spent only part of his senior year here.

A young Sammy Fabelman firmly grips his film camera as he dives into the sand under a beach volleyball net, attempting to capture action footage of his high school’s most popular jock spiking a volleyball into the opposing team’s court. Fabelman captures the senior ditch day for Grand View High, fashioning a movie with his clips to be unveiled at the senior class prom to cheers of camaraderie and hearty laughs.

This was one of few happy moments in high school for Fabelman, the depiction of famed actor and Class of 1965 alumnus Steven Spielberg — who attended the school for most of his senior year in 1964-1965 — in Spielberg’s autobiographical film, “The Fabelmans,” released Nov. 11.

In 1985, at the Class of 1965’s 20-year reunion, Spielberg — by then having directed award-winning films such as “Jaws” and “Raiders of the Lost Ark” — sent a representative to retrieve the actual film of his high school production. Spielberg, 75, did not come back to the school himself and has not ever since he graduated, echoing the negative sentiment toward his alma mater he has expressed in interviews. He told the San Jose Mercury News that his time at the school was “Hell on Earth.”

In “The Fabelmans,” his first truly autobiographical film, Spielberg chronicles his childhood, upbringing, family issues and early love for film. The film is technically fictional, but the vast majority of protagonist Fabelman’s experiences mirror the life of Spielberg — including his horrible experience at the school.

“The Fabelmans” serves as yet another reminder of the school and community’s past, reshining a spotlight on a history of discrimination and bullying. But it also reveals just how much the school has changed — from a white sports-focused school to a diverse STEM-focused school — in the six decades since.

The film expanded to a nationwide release on Nov. 23. As of Dec. 9, the film had grossed $6.1 million, a box office bomb for a big studio picture. However, awards potential for the movie is much brighter; its Rotten Tomatoes score stands at 92% and the film is considered a front runner for the Best Picture and Best Director Oscar awards.

The “Hell on Earth” of Spielberg’s memory

As Fabelman walks into his new school in late 1964 in the movie, he remarks that it is a “land of sequoia people,” or abundant with tall, built and white jocks compared to the short-statured newcomer. The popular kids walk around the school in hordes, all wearing school-colored letterman jackets and joined to their girlfriend by the hip. Fabelman, a quiet student obsessed with film, doesn’t fit in with the sporty, insular culture of the school.

But the issue extends much further, and much more personally, than Fabelman’s interests. In one striking scene, Fabelman is called racial slurs and violently assaulted by jocks. In P.E., Fabelman is brutally pushed to the ground and punched after an argument; the jocks threaten to beat him up and shatter his skull. Fabelman told his new peers he didn’t like their treatment, but they didn’t care. One of the worst bullies summed up their issue with him: “We don’t like Jews.”

In the film, Fabelman is called a kike and a “Christ-killing son of a b—-.” Students hang bagels in his locker and laugh, telling him he should like it because bagels are “kosher.” Even when Fabelman is in the spotlight for his senior ditch day film, his peers celebrate by chanting “Bagelman! Bagelman! Bagelman!”

Much of this — and the entire film — is based on fact: Spielberg and many of his childhood friends and peers worked with film historian Joseph McBride for “Steven Spielberg: A Biography” (published in 1997 and available in the school library), a book confirming much of the film’s events, but also adding additional details and contradictions.

The school McBride describes is cliquish, sexist, preppy, cruel and pampered. It was a “sprawling, maze-like complex of cinder block buildings, an oddly grim and graceless design for such an attractive setting” (Spielberg was reportedly influenced by the school in his designs for “E.T.” and “Poltergeist”). As is the case now, the school expected high academic standards of their students — so high that Spielberg earned Bs and Cs, even after working considerably harder than he did at his previous high school in Phoenix.

McBride shows that although Spielberg didn’t subscribe to Judaism completely and found the religion hypocritical — an idea portrayed in “The Fabelmans” as well — Spielberg’s Jewish identity was still important to him.

McBride’s reporting confirms much of what the movie alleges: Spielberg was repeatedly beaten up and peers would frequently throw pennies at him. As students walked past Spielberg in the halls, they would cough “Jew” into their hands. But McBride said Spielberg would also reference his Jewish identity frequently himself, making Nazi jokes with his friends and roleplaying being a Nazi, a piece of what McBride called Spielberg using Jewish humor as a coping method.

Spielberg’s experience was nothing short of miserable, making him feel as “alien as I had ever felt in my life.” In an interview with NPR’s “Fresh Air”, he said he internalized his anger and tried to make himself as small as possible, which he’s most ashamed of now. But the experience has left a lasting imprint: “I haven’t gotten over it nor have I forgiven any of them,” he said.

Despite this, many of Spielberg’s classmates — who were interviewed by McBride — have contradicted his recollection of the school. Judith Hamilton, another Jewish student in his class, said her peers were “perplexed and disturbed” when Spielberg first brought up his experience to the Mercury News in 1993: She thought he made the comments just to promote his movie “The Schindler’s List.”

“It was such a shock to all of us,” she told McBride. “Our wonder boy, the boy we were all so proud of, actually hated us.”

Don Shull, Spielberg’s neighbor and first friend at the school, said he never heard about Spielberg getting assaulted or beat up — he attributed Spielberg’s unhappiness to his complicated family life rather than antisemitism. (Spielberg responded that Shull didn’t know him well enough to understand what he went through).

But not all parts of Spielberg’s year at the school were horrible. In particular, he enjoyed working as a sports writer and columnist for The Falcon. Spielberg’s sports editor Mike Augustine told McBride that the journalism class opened up to Spielberg and allowed him to connect to the story side of the school, which Spielberg greatly enjoyed. At the end of the school year, Spielberg’s class predicted that he would write for The New York Times.

Spielberg’s social and love life was also not entirely dormant. He dated Shull’s sister (then a freshman) and they would makeout in the backseat of his car occasionally. (Fabelman’s Jesus-obsessed girlfriend in the film is not based in reality).

But, in the end, his peers agreed that Spielberg did not enjoy his time at the school.

“It was not a school to be the new kid in,” said Kendra Hanson, also a Jewish student in his class, told McBride. “If you stood out, if you were different, it was really tough to get integrated. If you were Jewish, you might have all the more reason for [feeling] different.”

The paradoxical change of today

When compared to Spielberg’s description, the school is now improved and significantly different in many ways. Most importantly, the antisemitism that Spielberg described is mostly gone.

When asked about the antisemitism at the school, senior Eli Tsives — who is Jewish — said that when compared to McBride’s depiction of what Spielberg was forced to endure, the school is now “definitely improved.”

“What he experienced back then, no one would experience now, at least not in that form,” Tsives said. “antisemitism took form as physical harassment — harassment that nobody will ever find on campus today.”

Still, Tsives mentioned that Jewish students are still a minority at the school. He noted many surrounding schools, including Fremont High, Homestead High and Palo Alto High have Jewish Student Unions, commonly known as JSUs — but Saratoga High does not. He had considered starting a JSU himself, but he knew it would be impossible to reach the minimum club requirement.

Tsives aspires to become a screen actor in Hollywood films after graduation and has ambitious dreams for his future just as Spielberg had. He finds that a false stereotype of Jewish people controlling Hollywood has pervaded public understanding, a stereotype which he aims to dissolve through his art.

According to Tsives, the drama program parent board contacted Spielberg shortly after the release of “Schindler’s List” in 1993, asking for donations, to which Spielberg responded saying he would never donate to this school because of how much he abhorred it, citing antisemitism as the primary reason. This information had accordingly been passed through the parent board, on which Tsives’ mother currently serves.

Tsives wishes to change the course of Spielberg’s narrative about the school. To do so, he plans to reach out to Spielberg and attempt to bring him to SMASH’N, the annual Media Arts Program culmination ceremony.

“I’m dying to do this,” he said. “I want to show him that we are better. We are stronger as a community. We want Spielberg to see the new Saratoga and not hold the grudges he still holds to this day. We’re not perfect, but we’re doing much, much better.”

Racism is just one of few things that have changed. In addition, the racial makeup of the school and academic focus is hugely different.

Fabelman’s school of the 1960s was full of white jocks. The school’s makeup today is wnow predominantly Asian American, and many religions — not just Judaism, but multitudes of Asian religions as well — have vibrant homes within the community.

Resulting from this demographic change, the sports obsession of the school is clearly an item of the past. Spielberg’s school competed well in sports and placed a large emphasis on it, even if the school was relatively new at the time. Today, many school sports suffer and can barely keep programs running. Flagship sports like football are still a large part of school spirit, but sporting success is rarely guaranteed.

In place of sports, thriving academic programs have sprung up. The school is now home to award-winning programs in robotics, economics and media arts — the latter of which was designed to cater to students like Spielberg. The Falcon (and its sports stories) are one of few constants that have remained.

In reality, the school that Spielberg described no longer exists, but his history serves as a reminder of the dark past of the school that is oftentimes ignored during conversations of progress today.

“The Fabelmans” did not accidentally put this focus on this school, which the film makes clear. After Fabelman presents his senior ditch day film at his senior prom, Fabelmans’ main bully comes up to him in a corridor, struck with emotion and shock as to why Fabelman portrayed him in a positive light. The conversation reveals Fabelmans’s — and thus Spielberg’s — commitment to a good story, but also his commitment to fighting for Jewish people and film students like himself, a theme that has been consistent in his career’s work.

The bully eventually forces Fabelman to promise that he will never tell anyone about what happened that day. Fabelman agrees, but slyly tells him: “unless I make a movie about it.” And make a movie he did.