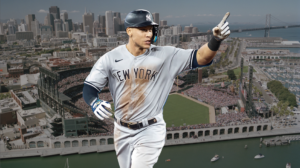 Photo by Vinay Gollamudi
Judge’s 62 home runs have made him a top target for the San Francisco Giants.

Permalink
Fans should appreciate the historic season, as there may not be another that matches it for a while.

The 2022 Major League Baseball season ended in early November, and while most fans probably weren’t too thrilled with the Houston Astros’ six-game World Series win over the Philadelphia Phillies, it’s important that we remember the whole season rather than just the ending.

The Phillies ultimately came up short, but their amazing run will not be forgotten. After nearly missing the playoffs and entering as the lowest seeded team in the National League, they knocked off defending champion Atlanta Braves and then the San Diego Padres in the subsequent round to reach the World Series. Their memorable victories over the Astros in Games 1 and 3 solidified Philadelphia’s spot among the best sports cities in the nation.

Easily the most impressive feat of the season, though, was New York Yankees outfielder Aaron Judge hitting 62 home runs. The total is the 7th highest all time, and many consider it to be the “legitimate” home run record due to the steroid use of the players ahead of him such as Barry Bonds. After a blazing-hot start to the season, the Yankees fell to the Astros in the ALCS, so maybe Judge will be disgruntled enough to look to change teams this offseason — maybe even to the San Francisco Giants, the closest team to his boyhood home in the Central Valley.

And despite my hatred of the Astros, I can still acknowledge the show that rookie shortstop Jeremy Peña put on in the postseason, taking home both the ALCS and World Series MVPs. With him and Mariners rookie Julio Rodriguez both having great seasons, the AL West division looks to be an exciting one to watch next year.

Along with young excellence, older players also made headlines in the 2022 season. Future Hall-of-Famer Albert Pujols, 42, returned to the St. Louis Cardinals this year for one final season. Despite mixed feelings about the universal DH (designated hitter) rule, it definitely benefited him and others this year, as he was able to combat his age by hitting primarily against left-handed pitchers. He cranked 24 home runs to reach the elusive 700 home run club, joining Bonds, Hank Aaron and Babe Ruth. It was the perfect way to cap off a legendary career.

Although Bay Area baseball fans didn’t have much to celebrate this year with the 81-81 Giants and 60-102 Oakland Athletics, there was plenty to remember from the 2022 MLB season. Personally, it was one of the best I’ve seen so far. While some might complain about TV ratings, the MLB has bounced back strong from the pandemic and might be approaching its best levels of play yet. Now if only we could see Aaron Judge roaming the outfield at Oracle Park next April and smashing home run after home run into McCovey Cove.