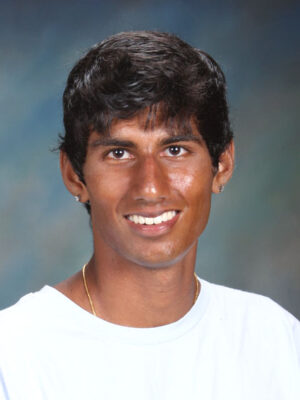 After hours of training for his next national tennis tournament last May, senior Nikhil Jayashankar drove home on what seemed like a normal Saturday afternoon. As he logged onto his e-mail account, little did he know that a surprise awaited him. The tennis coach of the prestigious Northwestern University Men’s Tennis Team had contacted Jayashankar, expressing interest in recruiting him for college tennis.

Sacrificing mornings to work out, nights to hone his skills and many weekends to play tournaments, Jayshankar has trained long and hard for tennis. All his dedication paid off when he was recruited as the only U.S. recruit to Northwestern for his tennis profile and academic achievements.

“I really like playing tennis and have always wanted to play Division I collegiate sports,” said Jayashankar. “I’ve known for years that college tennis was a path that I’d follow.”

During the summer before Jayashankar’s junior year, the Northwestern tennis coach Arvid Swan contacted him. Since then, they have been in contact by e-mail and phone. After the coach watched Jayashankar play a few national tournaments throughout the year, Jayashankar took an unofficial visit to Northwestern.

“When I visited [Northwestern], I really liked the campus, the people I met, and the support the school provides for athletes,” Jayashankar said.

In October, Jayashankar took an official visit to Northwestern, where he met and stayed with the team. A day after his visit, he gave the coach a verbal commitment to attend Northwestern. A month later, Jayashankar was officially recruited when he signed a National Letter of Intent, committing himself to Northwestern while receiving a full scholarship to attend.

“I ended up choosing Northwestern because I liked the coach and the guys on the team the best [out] of all the schools,” he said. “Northwestern [has] a really good team that competes in the Big 10, which is one of the best conferences in the nation; I wanted to a part of a team that could win a Big 10 championship and do well in the NCAA tournament. Also it’s one of the best schools in the country.”

Other universities Jayashankar considered were UCLA and Yale. However, the bond Jayashankar shared with the Northwestern tennis team was influential in his decision to attend.

“I met all the guys on the team during my official visit and stayed with them for a couple days,” he said. “I really liked all of them and that was a big part of my decision to go to Northwestern.”

At Northwestern, Jayashankar plans to major in either economics or the sciences as he balances both tennis and schoolwork.

“It feels really good to know that I’m going to get the opportunity to be a collegiate athlete but I still have to keep working hard to achieve both my college coach’s and my own goals,” said Jayashankar. “Right now my goal is to start as a freshman and make an immediate impact.”

Although Jayashankar shows promise as a tennis star, there is no certainty whether he will play tennis professionally in the future.

“If I’m having a lot of success in college a few years down the road, then playing professional tournaments is something that I will consider.”