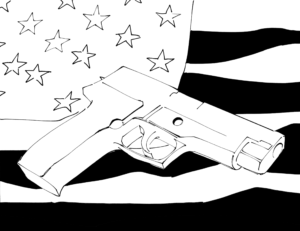 Photo by Leyna Chan
Despite an increase in public awareness and advocacy, gun violence continues to rock the country now more than ever.

Permalink
Gun violence is at an all time high in the U.S., and 609 shootings have occurred by mid-November — contrary to 2012, where under 200 shootings took place.

Six-year-old Allison Wyatt crouched in the corner of her first-grade classroom, terrified. The gunshots of 20-year-old Adam Lanza’s AR-15 rifle pierced the air as the screams intensified in Sandy Hook Elementary School on Dec. 14, 2012. She heard the splinter of her classroom door being kicked open, followed by more gunshots. The last things Wyatt heard were the terrified screams of her classmates.

Allison was one of 26 victims of the Sandy Hook shooting. The rampage, part of a 33% increase in gun deaths from 2011 to 2020, left 20 students and six teachers dead, as well as Lanza’s mother, who he killed before arriving at the elementary school, and Lanza, who shot himself with a handgun shortly before police arrived.

A decade has passed. Sandy Hook should have been a warning sign to the country, yet deaths from mass shootings — events where four or more are killed — have only risen year by year.

Despite bills and laws aimed at curbing gun violence after Sandy Hook, over 19,000 people were killed by a firearm in 2022 excluding suicides, 1,300 of whom were teenagers. Compared to other countries, firearm homicide rates in the U.S. are 22 times greater than those in the European Union and 200 times greater than in Japan.

When 18-year-old Salvador Ramos walked into his former fourth grade classroom in Uvalde, Texas, on May 24 and claimed the lives of 19 students and two teachers in one of the most horrific shootings this year, law enforcement determined that Ramos was a “barricaded subject,” or not suspected of committing a crime, preventing SWAT teams and local police from engaging with the gunman despite being in range. James Densley, a professor of criminal justice at Metro State University, commented on slow action both during and after Uvalde, despite resource officers at the school before Ramos entered campus.

“[In Uvalde] there was an army of good guys with guns in the parking lot. The hard approach doesn’t seem to be getting the job done,” he told Politico.

California is no exception. This year, six were killed and 12 wounded outside a nightclub in downtown Sacramento. According to the Gun Violence Archive, California experiences an average of 44 mass shootings in a year, or one approximately every eight days.

Even more residential communities aren’t safe from the possibility of mass shootings. On May 26 last year, just 20 minutes away from Saratoga, a gunman killed nine people before committing suicide at a facility in downtown San Jose. All victims were essential workers who were reporting to their jobs during the pandemic.

These numbers always shock the public at first, but more have become desensitized to so much death and are starting to have a muted emotional response to shootings, given their frequency. In an interview with Vox, Dr. Paul Slovic, a psychology professor at the University of Oregon, coined the phenomenon as “compassion collapse.” In essence, after society has experienced so many tragic events, people’s ability to empathize with others’ plight is worn down.

While understanding the motives of shooters is difficult, investigating the root causes of their behavior is key to preventing mass shootings in the future. According to clinical psychologist Peter Langman, however, that’s no easy feat.

“There’s no one thing, [but] a couple of dozen different things that come together to put someone on the path to committing an act of mass violence,” Langman said during an interview with NPR.

In another NPR report, Ron Avi Astor, a mass shooting expert and UCLA professor, points to almost all shooters having suicidal tendencies that spill over into wanting to also kill others.

“In other words, they’re gonna do both,” he said. “And finally, most want to be remembered. They don’t want to be forgotten.”

According to a 2021 comprehensive study that analyzed the behavior of every documented mass shooter since 1966, a shooter typically has a family history of violence in the home, sexual assault, parental suicides or being bullied as a child. As a result, childhood trauma can lead to a buildup of isolation and self-hatred, feelings that prospective shooters seek to release upon a group of people. For example, further investigation after the shooting in Uvalde revealed that Ramos had struggled with a long history of drug use and was bullied throughout his school years for a speech condition.

The study also found that the mental issues shooters faced in the past contribute to a never-ending cycle of creating more mass shooters. An investigative article published by the Los Angeles Times found that most school shooters have studied and used the actions of other shooters to seek attention and validation for their motives.

Trends across mass shootings show that they often come in clusters and are socially contagious events.

Psychologist Jillian Peterson and sociologist James Densley, both of whom have studied various mass shootings, found that media exposure and glorification of shootings in society and culture rendered a “Columbine generation,” a term that stems from the Columbine shooting in 1999 at Columbine High School in Colorado.

It refers to the generation currently going through secondary schooling and partaking in safety measures at their schools such as the requirement of clear backpacks and metal detectors. Starting from the tragedy at Columbine, which has since become a blueprint for school shooters to follow, Peterson and Densley have identified six mass shootings and 40 active shooter incidents at schools in the U.S. In 20 of those 46 school shootings, the perpetrator purposely used Columbine as a model.

Since then, mass shootings have been perpetrated through the use of firearms, which are widely available to almost anybody on the streets with so few gun control laws. Today, the main restriction against buying a gun is age.

In the U.S., shotguns, rifles and appropriate ammunition may be sold only to individuals age 18 or older, while all other firearms and ammunition are available to anyone 21 and older. Due to these loose laws, it makes it easier for school shooters to get guns, contributing to over 250 of these shootings that have taken place in schools this year — one-third of all shootings so far.

There is so much that is still unknown about the psyches of mass shooters, and further research about their mentalities would allow psychologists to effectively devise treatments for would-be mass shooters. New findings from researchers at Columbia University have begun to analyze data from the Columbia Mass Murder Database to gain much needed insight into the relationship between murders and mental illnesses. Their research has found that mass shootings should be classified as different from other forms of mass murder and should be looked as a distinct phenomenon. Small steps like these will help ensure that professionals and the public alike begin looking at mass shootings through a lens of improvement and helping rather than judgment.

Legislation since Sandy Hook: How has the government taken action?

Ten years since the deadliest school shooting in history, gun reform has seen little change, primarily due to partisan disagreement in Congress. In 2013, a gun bill emerged in the wake of Sandy Hook and allowed for background checks of most gun sales, but it was overruled in the Senate. At the time, then vice president Joe Biden offered an encouraging note and said that this failed vote would infuriate the American people even more and help start a movement. However, his optimism was misplaced. Since Sandy Hook, mass shootings in our nation have only increased.

Comparing the failed bill in 2013 to the one that was successfully passed this year, there have been improvements. While both proposed to run background checks on individuals between 18 to 21 years old seeking to buy a gun, Biden’s bill did more by including incentives for states to pass so-called red flag laws that allow groups to petition courts to remove weapons from people deemed a threat to themselves or others.

However, according to some, the bill is not enough. Legal fellow Amy Swearer from the conservative Heritage Foundation, a group based out of Washington, D.C., that analyzes public policy, critiqued the efficacy of President Biden’s gun control bill, saying it was pushing for politically divisive measures that could seriously damage rights to keep and bear arms without making the nation any safer.

“I think that these [calls in the bill] were very vague,” Swearer said. “None outlined specific measures — for example, what should constitute a so-called assault weapon in any of these bills? Would these bans be merely future bans?” she said in an interview with the Heritage Foundation. “You can keep the guns you have now, but we’re going to ban future sales or is it going to be a full-on Australian-style confiscation measure?”

Aster, the UCLA professor, compared the need for a driver’s license and a passport to the need for certification to own a gun.

“I don’t really understand why [there hasn’t been more gun control legislation]. Maybe it is money. Maybe it is the gun lobby. Maybe it’s become politicized and an ideological thing, but it should be treated as a public health measure,” Aster told NPR.

In just 12 months, 662 mass shootings have occurred in the U.S. Some shootings have occurred just 20 minutes away from Saratoga. Each week dozens of  lives are taken. These shootings are recurring reminders that advocacy for gun laws must increase and bills have to be passed for even the remote possibility of decreasing mass shootings. The media has a big part to play as well with so many people becoming desensitized to mass shootings in compassion collapses. Above all, we must finally learn from the loss of too many young lives that took place ten years ago at Sandy Hook.