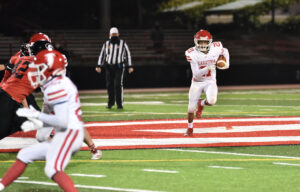 Photo by Courtesy of Selina Chen

Resting from an injury, junior wide receiver Parsa Hashemi watched as members of Homestead High School’s varsity football team positioned themselves in a defensive line against the attacking Falcons. The short scrimmage, played on March 12 on Homestead’s upper field, ended 12-6 in favor of Homestead.

Although unofficial, the scrimmage marked the first time the Falcons have played against an opposing team since the season began on Feb. 26.

The team adheres to social distancing norms whenever possible, but on the field, players practice and compete maskless. While the league has mandated some safety protocols like requiring teams to disinfect balls whenever they go out-of-bounds, practices and games generally resemble their pre-COVID-19 counterparts, head football coach Tim Lugo said.

According to Lugo, the team has two main goals this season: celebrating current seniors’ contributions to the team over the past four years and preparing current juniors for the fall season.

“They’ve waited a long time for this moment,” Lugo said. “There's no guarantee that we're going to play the entire season, so I wanted to recognize the seniors during the first [home] game and let their parents walk out with them — do it the right way.”

Regarding games, players may invite up to four immediate family members to watch each game as per the league’s COVID-19 safety guidelines; other students will have to watch online through an official National Federation of State High School Associations (NFHS) live stream. Cheerleaders will be permitted on the sidelines, and the dance team may perform during halftime.

The lack of an in-person crowd would normally discourage athletes, but this year, the team is just happy to play, Lugo said.

“Ideally, the team would like to have the stands full and all their friends cheering for them, but I think everybody kind of gets where we’re at right now,” Lugo said. “We’re just very thankful to have family be able to come, so we’re not playing for nobody.”

Other than the coronavirus, Lugo’s biggest fear this season is injury. In a normal year, an athlete could get injured and still be ready to play the following season, but because football has been delayed to spring this year, Lugo fears that injured athletes won't be able to play in the fall.

His fears are exacerbated by the departure of trainer Liz Alves, who left the athletic department earlier this year but continues to teach Health. The school has been unable to fill Alves’ position due to the turbulent nature of sports during the pandemic.

“Luckily, unlike a lot of other schools, the district has allowed us to lift weights since August, so our guys’ bodies are ready for football season,” Lugo said. “I’d be horrified to play the season if we hadn’t been able to lift weights, but I’m still concerned about nagging muscle injuries.”

Even in the face of potential injury and the pandemic, the team is looking forward to a fun and competitive year.

“We’re going to try to play the best we can each week, really enjoy each other and really appreciate the opportunity given to us by the state,” Lugo said. “We’re going to make the most of it.”