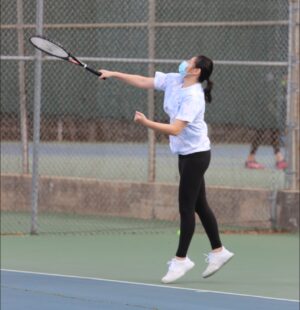 The last time the girls' tennis team walked off the courts in the fall of 2019, players never would have guessed that the next time they would play would be during the spring of 2021.

But there they were in February and March, breathing heavily through masks during intense matches as they tried to capture a feeling of normalcy that was lost during the pandemic.

Despite the pandemic-related challenges leading up to the season’s start that complicated training and drastically shortened the length of the season, the girls’ tennis team had a much more successful run than many of the players expected, according to senior Juhi Patel, who co-captained the team with senior Amanda Zhu. The varsity team went 6-6 and finished fourth in the league, following Monta Vista, Mountain View and Palo Alto.

“[The team’s success] was a welcome surprise,” Patel said. “We only had three returning varsity players from last year, so we didn’t really know what to expect coming in.”

Patel attributes the team’s success to the existing bond between several of the veteran singles players and their ability to communicate on strategy.

“The upperclassmen who were on the team last year already knew what to expect,” Patel said. “We helped each other out by discussing each opponent we had beforehand.”

Furthermore, skilled new underclassmen were important to the team’s success, Patel said. Vital singles players on the team this year included juniors Peixuan He and Naisha Agrawal, as well as freshman Sabrina Manea. Menea had played club tennis for two years prior to joining the school team, and reflected on what she considered a fulfilling season.

“Playing with different people of different ages was new and gave me more experience,” Manea said. “It was surprisingly easy to have a fun time while improving, especially with COVID making our matches more relaxed.”

While Patel had a much better experience than expected playing for and co-captaining the team this year, the expectation she had harbored for her own trajectory this year was greatly affected by COVID.

Patel considered aiming for college recruitment during her junior year but decided against it after the onset of the pandemic, as she had other commitments and wasn’t certain that she would be able to maintain her rank given the reduced number of matches.

However, Patel still felt that the unique circumstances and requirement of wearing a mask provided a way to improve her stamina.

“Especially for my first two matches, I was out of breath a lot [because of the mask], but I think they actually helped me improve a lot by the end of the season because it made everything harder endurance-wise,” Patel said. “I’d say I’m probably more fit now.”

Although she is no longer considering recruitment, Patel is still planning to play club tennis in college and may try to walk on to her college’s school team depending on the athletic division of the school.

Patel is satisfied with the outcome of the season, but regrets that she was not able to bond more with new underclassmen teammates because of the circumstances.

Team morale was lower because the girls weren’t able to hype each other up through traditions like high-fives, especially in doubles, and Patel said that not being able to see the faces of the new underclassmen during practice made it difficult to become close.

However, Patel believes the team did exceptionally well considering her initial evaluation of the season.

“We made our best effort to maintain good team morale and improve,” she said. “Even though I wish I could have gotten to know the underclassmen better, I’m proud of the hard work we all put in and what we accomplished.”