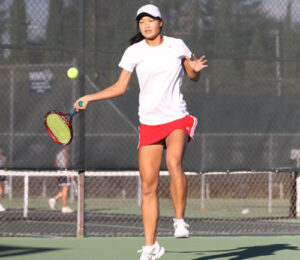 The fifth time was the charm for the girls’ tennis team. After four rain delays and four location changes, the team’s 12 members won the final round of the CIF NorCal Championships for the first time in school history 4-2 against Monta Vista on the afternoon of Dec. 11.

They finished the season 25-0.

The fifth time was the charm for the girls’ tennis team. After four rain delays and four location changes, the team’s 12 members won the final round of the CIF NorCal Championships for the first time in school history 4-2 against Monta Vista on the afternoon of Dec. 11.

They finished the season 25-0.

“Winning NorCals was just like the cherry on top of the whole season,” No. 3 singles senior co-captain Catherine Nguyen said. “It just felt like wow, I can’t believe we won all three titles and are undefeated.” Besides NorCals, the girls also won CCS and the season-opening Peachtree Classic in Fresno, which included more than 100 teams from across the state.

This game marked the fourth match-up of the Falcons versus their longtime rival this season. It was set to begin the morning of Dec. 11 at Cupertino High but was moved to Mt. Pleasant High in San Jose in the afternoon after the Cupertino courts failed to dry. This delay caused No. 1 singles player junior Crystal Yen to forfeit her match because of a prior commitment to play in the Herb Cup in Berkeley.

Though this forfeit gave Monta Vista an early 1-0 overall lead, Nguyen and No. 2 singles player senior Srinidhi Raghavan stepped up to win their respective matches easily.

The No. 2 doubles team of senior co-captain Mary Edman and sophomore Niharika Bedekar won for the fourth time against the same Matador opponents, this time with a score of 6-3, 6-4.

The rest of the doubles lineup had to be changed for the final two rounds of this tournament after the absence of junior Lisa Asai for family matters. Sophomore Evaline Ju replaced Asai’s No. 1 doubles spot to play with junior Sarah Lum, losing a hard-fought match 7-6, 6-2.

Senior Lauren Kuan, who had been an alternate for most of the season, teamed up with junior Tiffany Tu to compete in the No. 3 doubles position, adding the necessary fourth win 7-6, 6-3.
No. 4 singles player freshman Kalyani Narayan was behind 2-3 in her third set before referees declared conditions too dark to continue play, but by then the overall match was decided.
“I am proud of the efforts from everyone out there, and it shows the heart and determination we had not just today, but all season long,” head coach Tom Uyehara said.

Adding to the team’s dream season, Yen won the CCS Individuals tournament on Dec. 6, beating sophomore Mariska Chamdani from Archbishop Mitty 7-6, 6-2 in the semifinal round and sophomore Giannina Ong from Menlo 6-1, 6-1 in the finals.

“It was an awesome way to end the tournament,” said Yen, who has also been selected as the San Jose Mercury News High School Tennis Player of the Year.

The semifinal round of NorCals had been postponed to Dec. 2 in Walnut Creek, where the team beat Redwood 6-1, a repeat of the second round of the Peachtree tournament.

Early in NorCals in Sacramento on Nov. 19, the team easily defeated Chico 7-0 before rain began to fall.

On Nov. 17 the girls’ tennis team closed out the final round against Monta Vista with a 6-1 win to repeat as CCS champions.

“After winning I felt a sense of relief,” Uyehara said. “It is never easy to live up to expectations, but the team pulled through and showed their dominance with a convincing win.”

Nguyen and Narayan contributed significant wins early in the afternoon to take pressure off their teammates. Yen won easily 6-1, 6-2 over her opponent senior Sylvia Li, who plans to play for Harvard next year.

“It was a multitude of emotions [after the match]: relief, happiness, pride, mostly joy though,” said Bedekar, who with Edman won an arduous match in the second-set tiebreaker.

The sole match on Monta Vista’s scoreboard came from a close tiebreak win after split sets against the No. 1 doubles team of Asai and Lum.

This was the third time the team played Monta Vista this season, beating them 5-2 twice during the league matches in order to receive the first seed for CCS. Monta Vista was seeded second.

“I think [the biggest challenge was] just making sure we kept up our winning streak because we were on top for so long,” Bedekar said, “and no one remembers having a perfect season if you lose.”

On Nov. 15 they won 5-2 against Mitty, seeded fourth, in the semifinal round. Though both teams had changed the lineups for their first three players, Saratoga managed to win all the doubles matches, with triumphs added by Yen and Narayan.

The Falcons defeated both Leland and Sacred Heart 7-0 in the first and quarterfinal rounds respectively.

The coach has attributed this season’s success to the girls’ teamwork.
“Everyone supported each other on and off the court,” Uyehara said. “The team had many ‘bonding’ events which helped bring [it] together.”

After more than three months of teamwork plus three weeks of delay, the team can finally bid farewell to a long but perfect season.

“This season made me feel so complete because we won everything, so I loved it, and it made it easier to move on to college,” Nguyen said.