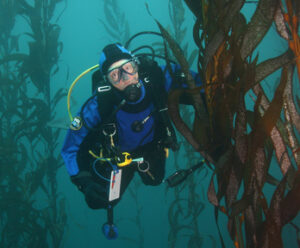 It’s a bird, it’s a plane…no it’s a nudibranch! The nudibranch (pronounced noo-duh-brank), a type of sea slug, is one math teacher and avid scuba diver Debra Troxell’s many favorite underwater organisms. Nudibranchs come in all shapes and sizes, which is why they are still considered a novelty to Troxell despite the fact that she inevitably sees one on every trip.

“Nudibranchs are my favorite,” she said, “but octopi are also pretty cool.”

Troxell first started diving in 1981 as a sophomore at Florida Atlantic University when she became certified in warm water diving.

“I tried diving since I was a very good swimmer,” said Troxell, ” and I’ve been hooked ever since.”

After getting married in Florida, she and her husband moved to California where they raised two daughters and a son—leaving no time for diving for many years.

“We were so busy being parents that there just wasn’t time to do any diving,” she said.

Her hiatus from diving continued until 2003, when her youngest daughter became a junior.

“My husband and I took some classes that year at West Valley College and we both got certified in cold water diving,” said Troxell.

“The most physically demanding part of cold water diving is getting in and out of the water because you have to fight against gravity,” she said.

On a typical dive, Troxell sees a variety of sea creatures, ranging from squid eggs and fish to octopi and crabs.

“We’ve seen everything from whole nests of eggs to thousands of bat stars feasting on dead things on the bottom,” she said, “but my favorite diving place is Thumbs Up in Carmel, where we see entire walls of beautiful strawberry anenomes.”

On each outing, Troxell typically dives two times for a period of 45 minutes each at a depth of 50-90 feet.

She and her husband take about 50 dives a year from their two kayaks into the Monterey and Carmel areas. She has also dived in place like Tahiti, Belize and Bonair.

They also volunteer at Reefcheck, an international non-governmental organization dedicated to the conservation of tropical coral reefs and Californian rocky reefs, where they help to gather data. This is an especially important cause, considering the multitude of threats reefs are facing, including poaching and pollution.

“This is my third year volunteering at Reefcheck,” she said. “Looking at the mess we have made of the oceans and the world, I felt like I had to do something to help.”

As part of her work as a volunteer, she counts species of fish, invertebrates and algae, and she collects data regarding the rugosity of the sea floor.

“The data that we collect is then used to help dictate fishing laws and determine the health of reefs,” she said.

Besides allowing her to experience the diversity of vibrant underwater life, scuba diving also offers Troxell a peaceful and relaxing environment.

“When I’m underwater, I feel like I’m in a zen-like mode just sitting and watching,” said Troxell.

Evidently it is a feeling she enjoys. In addition to spending thousands of dollars on scuba diving equipment, she has an impressive log book.