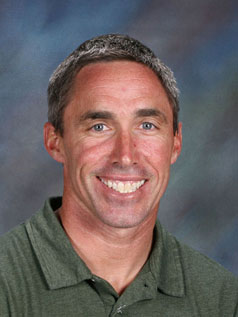 If you give world geography teacher Rick Ellis a map, he can point you to a lot more than just the Bering Strait, Zimbabwe or the Dead Sea. He can also show you some of best local spots to catch some waves.

If you give world geography teacher Rick Ellis a map, he can point you to a lot more than just the Bering Strait, Zimbabwe or the Dead Sea. He can also show you some of best local spots to catch some waves.

Ellis, who has been surfing since he was a teenager in southern California, manages to hit the waves at least two times a week, despite his heavy teaching load. Over the years, he has found some stellar beaches where he regularly surfs.

Ellis’ destinations usually depend on the surf, but he usually goes to Pleasure Point. Some other beaches he goes to are Manresa Beach and Moss Landing.

Ellis lives in Watsonville, a city in southern Santa Cruz County. As a result, Ellis usually surfs at beaches nearby.

“If the waves are really good, I’ll try to go before school, and after school sometimes, especially in the spring time. Since it gets darker later, I get into the water at 6 and surf until 7:30,” said Ellis. “It really just depends on the windows of opportunity.”

“In the Santa Cruz area and Monterey, there’s a lot of beach coastline. There’s some typical surf spots like Pleasure Point which has a lot of surfers, but there’s also a lot of beaches that people don’t go to,” said Ellis. “If you check it often enough and there’s different kind of sandbars, you’ll get lucky and have the waves all to yourself.”

Although Ellis is content with surfing around Santa Cruz, he would also like to surf in other places as well.

“Hawaii would be a nice place to surf. I’d also like to go surfing in Mexico or Central America [since I’ve] never done that before,” said Ellis. “We talk about Africa a lot in my geography classes. There’s a lot of coastline along the continent Africa that’s not surfed at all. That would be a pretty cool adventure, to go somewhere remote like that.”

As for surf spots for new surfers, he advises them to follow some general guidelines.

“[Beginners] should pick spots wisely, like go to places where beginners usually go. They should learn the etiquette of surfing, for example, the right of way, what type of surf board to use and how to hold onto your board,” said Ellis. “You really need to know the ins and outs of surfing before you go paddle out cause chances are, someone might get hurt.”

Ellis hopes that he will never have to stop surfing.

“It’s an addicting activity,” said Ellis. “I love the water, and it’s just a lot of fun.”