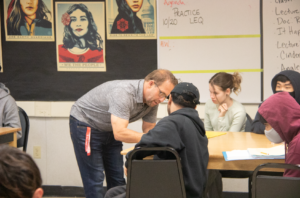 Photo by Will Norwood
Substitute Chris Rasmussen, who teaches U.S. history and History in Film, works with a student during fourth period on Oct. 19.

The school has welcomed new Precalculus teacher Khanh Criswell along with history teacher Chris Rasmussen. Both teachers have begun teaching their classes on Oct. 5 and Oct. 14, respectively.

Criswell has taught all levels of math in her 19 years of teaching. Due to her part-time teaching, she will be teaching at Logan High in the morning and Saratoga High during 6th period. She has no plans of leaving Logan High despite the 45-minute commute to the school. Because Criswell lives in Saratoga, she said that driving to Saratoga High is on her commute back.

Rasmussen, along with retired longtime SHS AP U.S. History teacher Kim Anzalone, will be long-term substitutes for history teacher Margarita Morelle, who took maternity leave starting on Oct. 14. Her one AP U.S. History class will be taught by Anzalone, while her three U.S. history classes and one History in Film class will be taught by Rasmussen. Morelle will resume teaching these classes at the beginning of the second semester.

Rasmussen started teaching 22 years ago at Westmont High, where he taught AP Government, U.S. History and Economics. He also coached soccer and baseball during his time there. After moving to and spending 15 years in Colorado raising his children, Rasmussen returned in 2016 to teach U.S. History at Branham High for one year. He is now employed as a substitute teacher at the school and Los Gatos High.

Rasmussen said he is excited about the remaining fall semester. He finds his current role to be an “easy transition” as Morelle has given him a detailed plan for the next two months of the semester.

“Morelle is very organized, so it makes my job a lot easier,” he said. “The students are also amazing and really helpful, so I think this semester will be a breeze.”