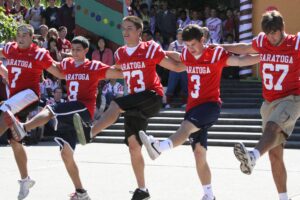 During the week of Oct. 8, students in each grade showed off every ounce of their class spirit while participating in Homecoming festivities. Despite obstacles that included the inability to go up onto the roof to set up decorations and the short amount of time to prepare for quad day, each class pulled together to complete their decorations and quad day performance.

The overall theme was board games: seniors with Candyland, juniors with Monopoly, sophomores with Clue, and freshmen with Chutes and Ladders.

The points system worked in a different way this year, with the class scoring the lowest number of points as the winner.

The freshman class, which came in fourth place with 18 points, received criticism from students in other grades regarding the parent participation.

“Being freshmen, we really weren’t 100 percent sure what to do,” said freshman president Nikhil Goel. “That’s where the parent help came in.”

According to Goel, all of the decorations were made by the freshmen themselves and not the parents, contrary to popular belief.

The sophomore class placed third with 15 points. They pulled together as a class and received feedback that their decorations and quad day were “major improvements from last year,” according to president Amin Mirzadegan.

“We put a lot of time into our quad day,” said Mirzadegan. “Some of that time could have been used to make the decorations a little bit better, but overall I think we did a lot better than last year.”

The junior class, in second with 9 points, managed to pull off a successful quad day to finally prove themselves. Junior president Anika Jhalani says being proud is an “understatement.”

“We are a wonderful grade, and what separates us from the other classes is that we have such a diverse group of kids that come out and help,” said Jhalani. “We really define what Homecoming is supposed to be; no cliques, no separation, just one huge High School Musical-esque team.”

As expected, the senior class came in first place with 6 points, wowing students and staff with their intricate decorations and well-executed Candyland-themed quad day. Senior president Michelle Wang was happy with the way the class pulled together.

“In spite of all of the college stress, we really came together and pulled it off,” said Wang. “I was especially happy with how many kinds of people came out this year and participated in quad day and decorations.”

On Oct. 8, the football team played against Lynbrook, winning 39-13. Members of the Homecoming court were also presented during halftime.

One day after the game, students attended the Homecoming dance to wrap up a festive week filled with school spirit. The dance ran smoothly for the most part, although many students had criticisms for the DJ.

“The DJ played a few strange songs here and there, but overall I really enjoyed the dance,” said junior Rebecca Smerdon. “It was a great way to end an eventful week.”