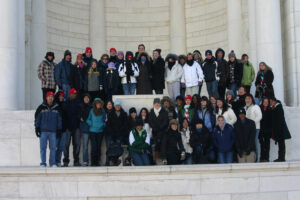 Faculty, chaperones and students take a group picture at the Capitol Building during their trip to the presidential inauguration

At 9:04 a.m. on Tuesday, Jan 20., most teachers were not lecturing or going over homework. Instead, they were streaming the inauguration ceremony for President Barack Obama in their classrooms to let students watch history in the making.

However, a group of 52, including students, teachers and chaperones and a couple other individual students who traveled with different organizations had the spectacular opportunity to travel to Washington D.C. and watch the inauguration in person. Another group from Saratoga also traveled to Washington—Redwood Middle School Marching Band and Auxiliary paraded down Pennsylvania Avenue as part of the inauguration parade.

Said junior Jan Iyer, “It’s been really fun and it’s been an amazing experience. I’m really fortunate that I was able to come.”

The group arrived in Washington, D.C., on Jan. 16. and spent the next two days visiting the Spy, Air and Space, and Holocaust museums; tourist attractions such as the show “West Side Story” and even a cemetery where the students had the honor of laying a wreath on top of The Tomb of the Unknown Soldier. On the third day of the trip, a smaller group of 12-15 went to see the Inauguration kick-off concert that featured Stevie Wonder, U2, Beyonce, Queen Latifah and other stars, including Barack Obama who addressed the crowd. The fourth day was spent in Gettysburg, and while most of the group went to dinner that night, a couple students, kids and teachers split off from the group to enjoy Disney’s Kids Inaugural Concert where they saw The Jonas Brothers, Miley Cyrus, Demi Lovato and other stars perform.

On the day of the inauguration ceremony, only eight had the highly prized tickets to get into the ceremony. Seniors Alex Sclavos and Alana Ledbetter and junior Nick Olsen and his mom made up the first group of four with tickets while the other group of four included seniors Abby Conroy and Alex Lun, junior Maddy Renalds, and History teacher Matt Torrens. All eight had to wake up at 3:30 a.m. to take the metro to Capitol Hall. However, only the second group of four actually got in while the other four were forced to watch the inauguration from a TV screen in a hotel suite with the rest of the group.

“It was such a mob, people were pushing and shoving so it turned out that the first group [of four] didn’t get in even though they had tickets for one of the best sections,” said Renalds. “I think everyone was so excited that they had an African American president that they were just stampeding.”

Although they had to shove their way and fight to stay as a group, the lucky four who watched the ceremony directly behind the first reflecting pool, approximately 200 meters from Obama himself, had a once-in-a-lifetime experience.

“[At the inauguration], there was something different in the air. Everyone was calm and words cannot describe how amazing it was to see and be able to say you were part of history,” said Renalds.

After the inauguration, the entire group of 52 settled into a suite at the top of a hotel to watch the parade. They witnessed Obama and Biden walking on the street below and even saw the Redwood Middle School marching band performing.

The Redwood band was chosen after director Vicki Wyant submitted an application over the summer. Redwood found out in early December that they were accepted and quickly scrambled for plane tickets and hotel rooms near Washington.

On the morning of the parade, the middle school students woke up at 1 a.m. and boarded their buses in Williamsburg, Va., for D.C. They then had to wait around for the parade to start at 2:30 p.m. Redwood marched 17th in the parade in the first section of line-up. Unfortunately, the inauguration festivities ran behind schedule and the band had to stand in the frigid 20-degree weather for over 90 minutes as they waited for the parade to start. At least 15 participants of the first section of the parade had to drop out, but not one student from Redwood did.

“Even one of the Marines dropped out,” said Redwood Color Guard captain McKenna Galvin. “We were tougher than the Marines.”

Back at the hotel suite, Saratoga High students tried to watch the Redwood marching band from their windows. Because they could not hear the band, they opened the windows, but their hopes were crushed when the Secret Service forced them to close the windows for the politicians’ safety.

“Government agents were all over all the buildings. There were [military] snipers on every building around,” said Iyer. “It was kind of scary but still amazing.”

Despite some ticket difficulties, the group had a very positive memory of the trip.

“[The trip] definitely exceeded my expectations,” said junior Natalie Tkalcevic. “It was tiring getting up and going to bed late, but it was worth all the exhaustion because there was always something to look forward to the next day or the next hour. There was never a dull moment.”