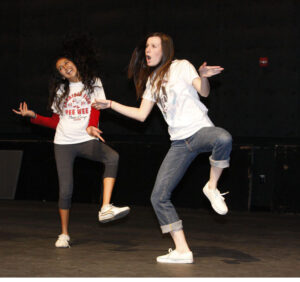 Tapping up a storm

After a mere three weeks in between productions, the drama department promptly cued the auditions for winter musical “Anything Goes” two weeks ago.

This Cole Porter show is different from the usual repertoire of annual musicals, all due to one unique addition: tap dancing. Susan Dini, the principal’s secretary and an avid tap dancer, has stepped up to take the lead as choreographer for the show.

She has taken time out of her schedule to attend lunch meetings in the weeks leading up to auditions in order to give the actors a strong foundation in tap dancing. With most auditioners not knowing the difference between a shuffle and a flap, her expertise has played a significant role.

“I have never felt less coordinated in my entire life. But it’s all about embracing the experience with our fellow performers,” said junior Jay Lee. “I love the lessons because I’m not the only one who’s struggling through the process.”

After emphasizing the basics for the first several lessons, Dini went on to teach the actual audition routine in advance.

“Tap is very difficult, since it’s really fast and you have to be precise and perfect in your movements for it to be done correctly,” said junior Abby Frankola.

Though most actors have never tap danced before, they have been attempting to practice together in order to pick it up as quickly as possible.

“A lot of the musical experience has to do with embracing our lack of skill in various areas together as an ensemble,” joked Lee. “I’ve always wanted to learn how to tap, and what better way to learn than by doing a musical?”

Auditioners agree that musicals are a lot of fun, since by the end of a show, the cast gets really close, having bonded over those many hours of singing and dancing incessantly.

“[Musical theatre] is the best part of drama because it incorporates all three elements: singing, dancing and acting,” said sophomore Anshu Siripurapu. “It appeals to a wide variety of people and anyone can be involved in the show in some capacity.”

Cast members look forward to the upcoming weeks of rehearsal and are excited about the prospects of “Anything Goes.”

“I was really glad to see some new faces at the auditions. You can never have too many people participating in these shows,” said Lee. “Hopefully, next time we can get some more people from the athletics departments to join our festival of fun and foolishness.”