May 6, 2021 — by Shaan Sridhar, Apurva Chakravarthy, and Anjali Nuggehali 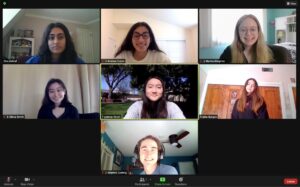 Junior Julia Burgos pored over her script during her Zoom call with 11 other Drama 4 Honors students. The group had been reading lines and reviewing blocking for almost two hours in preparation for the upcoming student production, “The Importance of Being Earnest.”

Due to COVID-19, the production has been forced to hold some practices over Zoom and find an effective way to transition the show online, all while maintaining public safety and the integrity of a normal in-person play. Despite the challenges, the show will go on.

“The Importance of Being Earnest,” a play by Oscar Wilde, revolves around two men, Jack Worthing and Algernon Moncrieff, who get caught in their web of lies as they both attempt to live a scandalous, wealthy life in London under the alibi of the titular fictitious man, Earnest. The play focuses on class issues and social expectations as it explores the lifestyles of the English upper class in the 19th century.

The play, directed by senior Elsa Ashraf, will be pre-recorded, edited and live streamed as a Zoom webinar on May 20, 21 and 22 at 7 p.m.; there will be a 30-minute Q&A with the director and cast after the May 22 show. Tickets are on sale for $5 each. Ashraf said the performance might be uploaded to YouTube later.

Ashraf first advertised auditions for the play in January and casting began in February. Drama teacher Bryan Ringstead, senior Eileen Sun and Summar Swift Bitar, a friend of Ashraf’s who lives in Pasadena and has also directed a student production, all sat in on the auditions. Although Ringsted advises Ashraf and helps advertise the show, Ashraf is primarily in charge.

During callbacks, Ashraf had the auditionees read scenes from a variety of characters, and after seeing what kind of character the auditionee would fit, she told them to read more specific scenes. In the end, Ashraf decided to cast all 11 auditionees to “make sure that everyone’s involved.”

Once the cast was finalized, cast members started memorizing their lines through Zoom and running through “blocking,” a process that organizes the actors’ onstage movements.

To simulate practicing in person, actors arranged pieces of furniture from around their home to simulate set pieces, which they could plan their movements around. Along with detailed notes that Ashraf provided, the group reviewed the blocking as a team to communicate various ideas and practice their lines and blocking individually.

“It was definitely a challenge to be told the blocking on Zoom rather than the director physically moving you to the right place,” Burgos said. “I had to spend a lot of independent time memorizing my lines and getting into my character.”

According to Burgos, who plays Jack, the production is different from normal years because there is no live audience. Instead, the cast now has to plan each act around how it will be filmed.

To prepare for the two-hour production, the cast first met around three times a week for one to two hours at a time on Zoom. Starting in mid-March, the cast began to meet more in-person at the school — as of April 28, the production was meeting four times a week and had met an estimated 15 times in just the month of April.

Ashrad said the cast spent about a week building the set for the production, which they assembled in the school’s little theater. However, she said it had to be dismantled for the school musical, which needed the platforms in the set. Tech director senior Stephen Ludwig and stage manager Sun collected platforms for walls, and actors from the musical helped build the platforms for the floor.

Because the play will be filmed rather than performed live, Ashraf said she is spending significant time on editing and getting significant help from students in the Media Arts Program.

She said she enjoys directing the show because she has spent so much time as an actress that directing offers a nice change of pace. Ashraf added that it will also make her a better actress.

“Directing has made me think more about specific acting choices from the lens of an outsider,” Ashraf said. “This motivates me to think about that while acting.”

Burgos said Ashraf’s thorough directing has helped her understand the script and anticipates a final production that the whole cast will be collectively proud of. Despite the restrictions stemming from working online, Burgos said she is grateful for the challenge as an actress and values the supportive environment that the show has fostered.

“I didn’t think my first student production would be created in this way, but I think that undertaking such a massive project pushes us to be better,” Burgos said. “Being able to work with my peers and create something purely student-driven is really cool.”