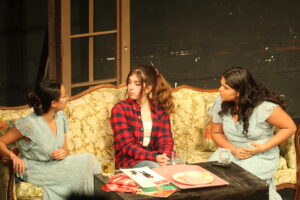 Permalink
Seniors Ananya Gupta and Anastasia Ramirez directed “Laundry and Bourbon” and “Who Made Robert de Niro the King of America” as part of a directing project.

The lights of the Thermond Drama Center dimmed as main character Elizabeth — played by senior Jo Bejar — and her longtime friend Hattie Dealing — played by sophomore Niraali Garg — took the stage. The rapid-fire conversation continued until a ripple of laughter ran through the crowd and filled the small room as Hattie delivered a signature humorous remark.

Around 50 people out of the total 90 seats attended opening night, with the next day’s turnout garnering a similar response.

“It was much better than I expected, and truly enhanced the experience,” Gupta said. “I’m proud that a lot of people got to see the amount of work we put into this show and appreciate the sheer talent of my cast and crew.”

“Laundry and Bourbon” is set in Elizabeth’s house in Maynard, Texas, where she and Hattie spend their time gossiping about the secrets of their small town while folding laundry and sipping bourbon. They are joined by Amy Lee — played by sophomore Jing Jing Zhang — whose loose mouth reveals that Elizabeth’s husband Roy has been going around town with another woman. The one-act play center’s around the banter between the three housewives whose married lives turn out to be less than they hoped for.

“I knew I wanted to do a play that centered the lives of women and gave me the opportunity to do a lot of character work by including really strong, layered characters with lots of dialogue,” Gupta said. “Mr. Brotzman said he had this script in his library, so I borrowed it from him, and fell in love with it.”

Auditions for both plays began in October and rehearsals started a week after, with the entire process taking about eight weeks leading up to the opening night. Rehearsals did not conflict with fall play rehearsals, as they were usually during tutorial.

The directors built a schedule with the stage managers and worked through stage directions and character work every rehearsal. One of the most challenging aspects, Gupta said, was learning to get a lot of work done in a short span of time, given that the directing slots didn’t allow them as much time as would be ideal to direct a one-act play.

Garg — who portrayed Dealing, the friend — also said she felt the experience of having a student director was considerably different from being directed by drama director Benjamin Brotzman.

“Usually you know [a student director] before and it’s easier to talk to them compared to an adult director,” she said. “The experience is very different as they are also figuring out things at the same time as you are so it’s nice to have someone by your side.”

The one-act play was followed by “Who Made Robert de Niro the King of America,” centering around aspiring screenplay writers Maggie and her husband Red, played by sophomore Diya Iyer and junior Ariana Tootoonchi, respectively. When Red picks up writing right after he gets laid off from his job as a construction worker, Maggie thinks he’s taking it up as a fun activity and not taking it as seriously as she does. Maggie’s agent Samantha, played by senior Olivia Smith, visits their apartment and brings a great opportunity with her.

“Mr. Brotzman recommended this play to me because it was the first play he directed,” Ramirez said.

However, that was where Brotzman’s input ended, a fact that Ramirez found daunting at first. Despite that, she learned to become more outspoken about what she wanted to see throughout her experience directing. With the help and validation of the cast, she became more sure of her directing abilities.

“My three actors and I would all work together to find the best place to add comedic and dramatic bits,” Ramirez said. “There was never a boring second during my 8-week production.”

Both directors expressed their happiness with the reception of the play, with Ramirez saying that its comedic edge struck its mark with the audience.

“I couldn’t stop smiling and laughing when I was sitting up in the tech booth when the crowd would erupt in laughter,” she said. “It felt so good to have my joy and hard work transfer over to the audience.”