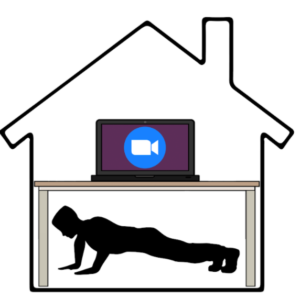 Freshman Mitchell Chen grunted as he completed his 47th, 48th and 49th pushup. He expected his arms to begin tiring around his 50th pushup, yet as he continued, he felt no sense of aching. Surprised but encouraged by his success, Chen continued with the exercise until he reached 100 pushups, his highest total ever.

Chen was motivated to embark on his exercise regiment after becoming  overweight at the start of quarantine. Without the constant motion and activity of in-person school, Chen found it easy to lose control over his health.

“I just started snacking a lot,” Chen said. “When I was in class and felt hungry, I had an option to get Cheetos out and start snacking; in school, you don’t have that option to eat in your classes.”

After weeks of a poor diet and inactivity, Chen could feel his body worsening. He resolved to make a change.

“I was losing focus more frequently,” he said. “My diet and my days of just sitting here didn’t really help, so I decided to change that.”

Chen started by cutting back on junk food and began eating more typical breakfast foods, such as cereal and oatmeal. He also replaced much of carbohydrate-rich food with proteins, such as eggs and meat.

Then Chen began exercising.  He made a routine of what he had to do each day. He was determined to follow his plan closely, which he had struggled with in the past. In fact, Chen emphasized that the most important part of changing his mentality was sticking to the created plan no matter what.

“The first day, you feel pumped and you got it; the second day, it starts wearing off; and it’s the third day, where you do five pushups and think ‘I'll do it tomorrow,’” Chen noted. “That's what I did in the past, but this time I just stuck to it, and after two weeks, it started getting easier and easier.”

Though there were a lack of open gyms  and worsening air quality during quarantine, Chen did not let this impede his exercise schedule. Instead, he stuck to fundamental exercises during his training. Every morning, he cranked out 100 pushups, 100 crunches, 100 leg raises, followed by a five-minute plank hold and a 3-mile jog.

Eventually, Chen could feel himself getting stronger, faster and fitter. He could easily increase his daily repetitions, and even began delving into cardio as opposed to his status quo strength training.

For those aiming to improve their fitness, Chen stressed that diet is incredibly important. He suggested that food shouldn’t be used as a method of distraction.

“A good way to do that was just being on my phone,” he said. “If you’re on your phone and you’re eating Cheetos, you don’t want your phone to get dirty. You just do stuff like that.”

In addition, Chen said exercise, while hugely beneficial, doesn’t have to take up much of one’s day and could be as little as 20 minutes. Making sure to continue with a set schedule is far more important than the amount of time spent each day.

Ultimately, Chen’s commitment to get back in shape increased his mental and physical health, and he knows others can have equal success.

“I just did this to make me feel better,” he said. “As long as you stick to it, you’ll feel better just keeping in shape.”