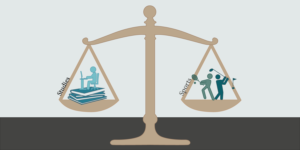 Class of 2020 alumnus Kevin Sze stepped out onto the Inverness golf club course in Toledo, Ohio, ready to compete in the 2019 U.S. Junior Amateur Championships.

The tournament fielded the 156 best junior golfers in the country, and Sze said they were treated like kings. In addition to free snacks, drinks, protein shakes, breakfast and lunch, competitors received a free shirt, pullover, hat, backpack and a daily inspirational letter from golfing legends such as Tiger Woods and Jack Nicklaus.

This is one of Sze’s most memorable tournaments, but he has put in countless hours of hard work to get to where he is now in his golfing career. Sze, who has been golfing competitively for 11 years and now plays D1 golf at Harvard, had to balance his social life, academics and athletics throughout high school. Many high school athletes, like Sze, had to make sacrifices in order to dedicate more time to their sport, maintaining a precarious equilibrium between practice, homework and other commitments. That commitment grows in college, though Harvard canceled its golf season amid the pandemic this year.

During summers, Sze spent  6-10 hours a day practicing golf, waking up at around 11 a.m. and staying at the golf course until dark. Sometimes, if he was tired and felt good about the work he’d done, he’d leave early. Other times, he would stay late until 9 p.m. to work on a skill.

“Basically all I did in the summer was play golf,” Sze said.

During the school year, however, he had to establish a routine where he would have enough time in the day for both school-related and sports activities.

“I'd practice in the afternoon after school and then do homework at night,” Sze said. “There wasn't a lot of time for social stuff, but I learned to accept that as I got older.”

Sze said the social aspect of school was tough for him as an underclassman, as he felt insecure since he was bullied a bit for dressing funny. He wanted to buy expensive clothes, dress cool and go to parties. In hindsight, he is glad his parents were tough and didn’t buy him new clothes or allow him to go to parties, since it encouraged him to focus more on golf.

“In the summer before my junior year, I started seeing some really good results in tournament golf, and I realized that a lot of the work I was putting in was paying off,” Sze said. “Seeing other people going out and partying actually made me want to work harder.”

In order to set aside as much time as possible for golf, Sze prioritized high standardized test scores and GPA — paying close attention in class and getting homework done as soon as it was assigned.

Harvard first reached out to him about recruitment in late 2018 and talked more in the summer of 2019. He is now an economics major at the school. He said he has had an enjoyable first semester at Harvard despite the pandemic and not getting to compete against other teams.

“I always wanted to play on the PGA [Professional Golfers Association] Tour and I still do to this day,” he said. “That's always been my goal, and to me college was just a step in that process.”

Tennis star finds a home on the farm

Class of 2018 alumnus Dean Stratakos, now a computer science major and varsity tennis player at Stanford University, puts in 20 hours of tennis training per week, a rigorous academic course load. He has also had internships at companies such as Apple.

Like many student athletes, Stratakos has worked hard to establish a balance between athletics and academics, making sacrifices for each along the way.

“I would skip days of school to travel to out-of-state tennis tournaments, but I would also skip important tournaments to attend an abacus competition or even make sure I was well-prepared for a big test,” Stratakos said.

When he was young, his parents encouraged him to try a variety of activities. He learned abacus for 10 years and entered math competitions like the Math League and Math Olympiad as early as third grade. In athletics, he tried swimming, taekwondo, basketball and soccer. Over the years, he narrowed his interests and activities, continuing to pursue his passion for STEM and beginning to focus on tennis in seventh grade.

“I was drawn to the individual nature of the sport rather than having to rely on a team — I either got all the glory or all the defeat,” Stratakos said. “I had also gotten the best at tennis relative to the other sports and had developed close friendships with my peers in the tennis community.”

Now at Stanford, he has found that the balancing act between athletics and academics mirrors what he experienced in high school, with the exception that the time commitment for each has drastically increased. Still, he says he is equally devoted to tennis and his computer science degree and that both of these significant parts of his life have contributed to his personal development.

“I think the two journeys complement each other well and both are important to developing a well-rounded personality,” Stratakos said. “Time spent on the tennis court gives me a break from the pressures of academics, and time spent on schoolwork keeps me sharp and occupied.”