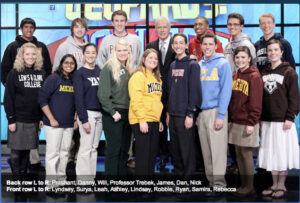 “These two men first meet in 1 Samuel 16 when one becomes aware of the musical talent of the other,” said Alex Trebek, the host of Jeopardy.

After two weeks of competing on College Jeopardy, ’08 alumnus Ryan Stoffers reached Final Jeopardy in the topic of Biblical Kings during the second and final game of the two-part College Finals which aired on Feb. 12, coming in second place. The night before, he had placed second, $5,200 short of first, so he needed to make up the difference.

Although Stoffers answered correctly––”Who is King Saul and King David?”––and Nick Yozamp of Washington University in St. Louis who was in first place answered incorrectly, Stoffers’s wager was only $1,000. This put him in second place—ahead of Surya Sabhapathy from University of Michigan but behind Yozamp, who took home $100,000.

“I regret not betting more, but I have to remember that my answer on the last question was a guess. Biblical trivia is not my strong suit.” said Stoffers. “If I had bet a lot, I could’ve easily guessed wrong and ended up in third place.”

Despite not becoming the champion and claiming the $100,000 prize, Stoffers still won $50,000 for placing second out of the 15 contestants. He plans to use the money to study abroad in Thailand next fall and help pay for graduate school.

“I remember going into it knowing that the minimum prize was $5,000 and thinking how awesome it would be to get that much, and I got 10 times that amount!” he said.

In the end, Stoffers was satisfied with his earnings and thankful for all his supporters, including the Facebook group with over 700 members. He said he was also inspired by games such as Trivia with history teacher Jerry Sheehy and Super Quiz with and chemistry teacher Kathy Nakamatsu while at Saratoga High School.

“I say thanks to everyone who watched and cheered me on, and I hope they enjoyed my shows. And I recommend to everyone that they try out for the show if they have any interest; it’s an unforgettable experience,” he said.