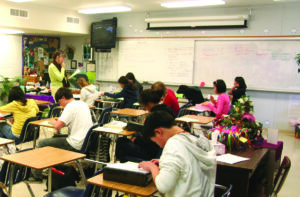 Small classes like these may increase in size next year because of budget cuts.

Although this is a significant sum, students will not be affected much during the current school year if this plan is passed by the state legislature. For the next school year, however, Schwarzenegger also proposed another 2.2 percent cut, or $756,000, that will affect Los Gatos and Saratoga High. This may result in a slight increase in class sizes and not replacing some retiring teachers. Teacher layoffs are not expected, Matsuoka said.

As a response to this proposal, the district has frozen all categorical spending, which consists of money the state gives to the district to spend specifically in certain areas, like school textbooks and smaller ninth-grade English and algebra classes. He said these ninth-grade classes, which are currently staffed at a 20-1 ratio, could go to 25-1 next year. Categorical funds comprise $2.5 million out of the total $35 million district budget.

“Categorical programs are those that are discretionary,” said assistant superintendent/CBO Tom Woodruff. “Freezing these funds would affect specific areas such as the smaller sizes of ninth-grade classes.”

Out of California’s $110 billion state budget, 50-53 percent goes to public K-14 education, which covers kindergarten through community colleges. Both the state and every school district within the state have planned their spending based on this budget. Because of the current state of the economy, few tax revenues are expected, and the state budget for next year is now projected at $90 billion, a significant drop. The state legislature must now take immediate action to provide a solution, so districts across California can adjust their budget plans, Matsuoka said.

“This is problematic state-wide, and there’s no way that the state can solve the budget crisis without touching education. We’re too big a part of it,” said Woodruff.

Even though the governor has only recommended this proposal, Matsuoka believes that actions must be taken as soon as possible to deal with this crisis.

“I definitely think some form of this proposal will go through. It’s hard to tell how it’s going to play out,” said Matsuoka, “but they definitely needed to do this five months ago. Every week they don’t decide on a plan of action, they keep overspending based on the $110 billion budget.”

This problem could potentially lead to a $2 billion deficit every month for the state of California, and the longer it takes for the decisions to be made, the more the budget cuts will affect the schools. As for now, though, the budget cuts are not expected to affect Saratoga High’s classrooms except for a cut-down on conferences for teachers and administrators and special equipment for some classes.

Matsuoka said he hopes the students in the district’s two schools will not be greatly affected by this budget cut because of the help of block grants and district resources that may be used for categorical spending.

“With categorical funds frozen, block grants allow for us to spend the money we receive in these areas in a flexible manner in order to cover everything we need funds for,” said Woodruff.

The districts are preparing for a tough upcoming year, but they are expecting a better financial situation by 2010.

“This is probably the hardest recession I’ve experienced since I was a citizen,” said Matsuoka. “It won’t be until around 2010 before things start to bottom out, but things will come back. History tells us that.”