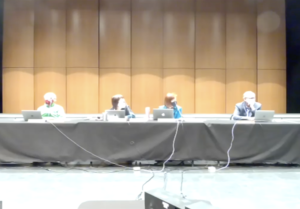 Photo by LGSUHSD
The Board of Trustees debates the implementation of a new bell schedule at the meeting on May 10.

Permalink
From the Phase 4A reopening plan to curriculum pathway alignment to the new bell schedule, the board has repeatedly ignored its duty to listen to and protect its stakeholders.

Go to the Saratoga Falcon’s website: www.saratogafalcon.org. Then go to the gray search bar in the top right corner, just under the date and location of our publication. Type in “school board.” Click enter.

As of writing, there is a story about the bell schedule, in which the senior class president laments the board’s decision to abandon daily tutorials. The next story: an opinion piece criticizing the board’s lack of transparency during reopening after the pandemic. The third story: a news article about angry student reactions at a board meeting.

But that’s just right now. In the coming days, more stories will appear. And they — like the previous ones and this one — will almost surely be just as critical of the board’s leadership.

Does The Falcon editorial board have a grudge against the board? Absolutely not. Our criticism is warranted: The current school board has repeatedly refused to listen to community feedback and stakeholder preferences, instead opting for arbitrary decisions that invite backlash. We have lost confidence in their leadership.

Let’s take a walk through history.

At the end of the last school year, the district changed its school reopening plan and adopted the Phase 4A schedule, which returned school to a five-day schedule and removed asynchronous Wednesdays for the final few weeks of the school year.

Before the decision was officially adopted, it was met with fierce opposition from teacher and student stakeholder groups. A group of 16 students representing the school’s student leadership spoke about the results of a survey they conducted in regards to the reopening plan. Four hundred and forty-six students, or one-third of the student body, participated in the survey, which showed that 91% of students were in strong opposition to the plan, while less than 1% were in support or strong support of the plan. A stream of teachers — including science teacher Kathy Nakamatsu and former athletic trainer Liz Alves — also criticized the board’s lack of transparency with teachers, who were already struggling with hybrid learning in four-day weeks.

It was clear that the student and teacher stakeholder groups — both of which were not consulted in the creation of the plan — had a supermajority in opposition to the plan. Despite this, the board moved forward with the 4A schedule, citing concerns from small vocal parent groups, like the Los Gatos Parents for Educational Excellence, which in no way represent the entire parent population.

Taking the work group’s recommendation into account, the board gave the district guidance to move ahead with aligning graduation requirements. But some members added additional guidance: Move ahead with exploring total alignment, which the community had resoundingly rejected — another example of board members refusing to listen to the vast majority of their community.

Most recently, the board has ignored its stakeholders regarding the bell schedule. Despite endless hours of district work and community feedback regarding schedule parameters, the board ignored stakeholders’ preferences at the May 10 meeting, opting to explore different possibilities against the will of the community.

A majority of the board blamed the decision on district leaders, who they said had not adequately collected enough input from community stakeholders. The truth is in fact the opposite: The district collected more data and input than could possibly be useful, but the board chose to ignore it.

The clear result of the survey was to implement two schedules, one for each school site, supported by a supermajority of stakeholder groups at each site. But a majority of the board refused to accept these results.

There are exceptions, of course. Not all board members supported abandoning the community feedback regarding the bell schedule. Those same members also supported listening to the community regarding curriculum alignment. They deserve commendation for their commitment to the community, but they are unfortunately not the majority and can not influence the decisions of the board alone.

This article serves no purpose other than to let the board know: Students, parents and staff realize they aren’t being heard.

So we call on parents, graduating students and active community members — those who can vote in our community — to take a closer look at the people they elect to our school board.

Board members are supposed to oversee their district, not interfere and manipulate it. Their job is to ensure that district decisions are being made only with informed feedback from stakeholder groups in the community. Their job is to protect the voice of students, parents and teachers.

If anything, this board has done the opposite, so we have lost confidence in their ability to lead our school. In the election this November, three positions could be filled by new community members. Let’s hope better candidates step forward and the community votes for change.