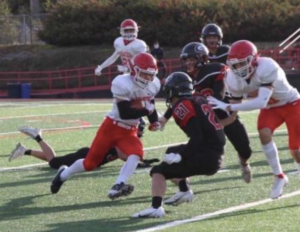 Sophomore Paolo Navarro dodges the other team’s players as he runs with the football to score a touchdown.

With adrenaline rushing through his body, sophomore Paolo Navarro dribbled a soccer ball between his feet, sprinted across the field and scored a goal for his team at South San Jose Club.

Paolo looked forward to the thrill of games on the weekends, but after the COVID-19 pandemic struck, he was devastated to stay at home and stop his training.

After the county moved to the orange tier earlier this year, athletes were allowed to go on campus in one cohort, meaning they could only play on one team. On April 12, the district office announced a revision to its decision on multiple sport participation in the orange tier, where students could then be allowed to play on multiple high school teams if the coaches of both sports agree.

However, prior to the change, Navarro had to choose between continuing his five-year journey of competitive soccer or playing a second year on the high school football team. Because soccer had been his primary sport in the past, Navarro wanted to “try something new” and chose to stay on the football team this year.

This was a difficult decision for Navarro as he said that soccer has always been part of his life; his father Paul Navarro, who also plays soccer, introduced him to the sport at age 8. Despite years of soccer experience, Navarro said a significant reason was that he wanted to spend more time with the seniors on the football team for the final season of the school year.

Although the football season was cut short this year due to a COVID-19 case among the players, Navarro said the season still ended on a decent note. He and his teammates are glad they got to have a season, though he wishes it had lasted longer, especially because he doesn’t plan on playing sports competitively after high school.

“It is sad to think about it ending,” Navarro said. “But the experiences are worth a lot — you get to grow [with your friends] together and have fun. I would say the takeaway [from this season] is to appreciate the time we were able to spend as a team this year.”