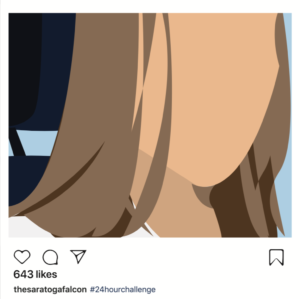 While being quarantined these past few weeks, chances are that you’ve seen the #challengeaccepted posts promoting girl positivity that have been circulating on Instagram.

These story posts feature a user’s picture, 10 other tagged accounts and a caption encouraging the spread of positivity along with the hashtags #challengeaccepted and #24hours, encouraging others to follow suit.

Don’t get me wrong, I’m all for girls supporting girls, and I support women’s empowerment as much as the next person. But when this empowerment is being exhibited in the form of a superficial picture, I have to wonder how much of this trend has to do with “spreading positivity” and how much of it really has to do with girls posting pictures of themselves in order to jump on the bandwagon.

Most of these pictures aren’t authentic at all — many are heavily edited pictures shot by professional photographers of girls wearing makeup and fancy clothes. This encourages people to value appearances over character. It’s simply an excuse for girls to receive superficial validation from their friends without doing anything to spread positivity.

Personally, all my friends to whom I have talked about this trend simply ignore these posts.

It is very rare for a stranger to respond to these stories and “spread positivity,” especially with the pervasiveness of these posts — it would take hours to go through them all.

In fact, the only posts that I looked at were from people I knew or from friends who had tagged me. Although I did not accept the challenge, I still complimented my friends.

But in the end, aren’t the results of this challenge the same as a regular Instagram post, with strangers just liking or scrolling past it while only your friends hype you up?

If this challenge involved authentic photos, that would be a different story, and originally, that’s what this trend was. However, it shifted to a more superficial intent as it became more popular and widespread.

Girls really would have to be brave to post a completely unedited, candid photo, especially with the social pressure on women to have perfect bodies, trendy clothing and their best look all the time.

An authentic trend like this would genuinely help with spreading positivity rather than merely using positivity as a justification to post a staged photo. It would teach people to reserve judgment and build girls’ confidence, enforcing the idea of girls supporting girls.

That being said, there’s nothing wrong with participating in the #challengeaccepted trend. Anything that makes you feel more confident is always positive, but I’d rather get my confidence and validation from somewhere more genuine.