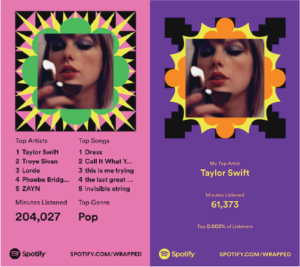 Permalink
Only one step closer to proving my place as Taylor Swift’s No. 1 fan.

I think it’s safe to say I have an insatiable addiction to music. From the moment I wake up in the morning to the wee hours of the night, I’m constantly shuffling through my numerous Spotify playlists. On a dreary late November morning, I instinctively opened the app to be pleasantly surprised with my Spotify Wrapped; Christmas had arrived early. A colorful banner reading “Your Wrapped is here” warmly greeted me, something I eagerly anticipated throughout the entire year.

As I tapped through the animation, a number of statistics stood out to me. While I already knew my Wrapped was going to be dominated by Taylor Swift, I was surprised by the number of minutes I listened to her.

In the past four years, my “Minutes Listened” has increased exponentially, both impressing and worrying my friends and fellow Spotify listeners. I originally downloaded Spotify in 2019, with my total minutes listened starting around 74,000. My minutes listened increased as the years went by, with an additional 32,500 minutes on average annually. This year, I had a whopping 204,027 minutes, or nearly 10 hours per day. Admittedly, I was more impressed than concerned with my daily listening since I made it a distinct goal to surpass my total minutes each year by exploring more genres and artists.

That being said, I was truly taken aback by my Taylor Swift stats. Not only did she dominate my top five songs and top artist position, but I also dedicated a total of 61,373 minutes and placed in the top 0.005% of Taylor Swift listeners this year, equivalent to almost 43 straight days of listening.

I’ve surpassed my own expectations I had with my Swift stats, but clearly, the sheer number of hours dedicated to listening to her playlists on repeat day by day truly paid off. While scrolling through social media, primarily Snapchat, I saw that Taylor Swift was a common top placer among my friends, and all I could think was how superior I felt compared to their dedication. While I realize this is just a petty feeling, I can’t help but feel like I deserve a prize other than the satisfaction of being one of the 400,000 top listeners.

Unsurprisingly, my top songs for the year were all by Taylor Swift and other similar artists such as Phoebe Bridgers and Lorde. Artists Troye Sivan and Zayn Malik also placed on my top 5, adding slightly more variety to my main genre of music. There’s not much else I can do to prove my loyalty to my favorite artist, and Spotify Wrapped made that incredibly apparent.

Throughout the year, I’ve listened to over 1,660 artists as I discovered my particular music taste, which is Indie Pop. I’ve focused majorly on depressing music (as the average teenage girl does), making my top 100 songs the sad girl anthems of the year. Some months were happier than others, which is shown in a fluctuating pattern of occasional happy music in the playlist. Spotify Wrapped never fails to make me flashback to differing music eras in my life.