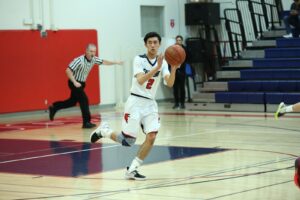 Teams have turned toward a variety of online and in-person adjustments to maintain fitness during the quarantine.

Because of the COVID-19 pandemic, all sports teams have had problems starting up and adjusting to practices for the upcoming 2020-2021 season.

Some teams, like the football team, have turned to individual and online workouts to safely prepare for their season, which is set to begin on Dec. 14. The football team typically meets twice a week over Zoom, during which they use a workout program called Volt to emulate workouts that they would have done in person.

“Considering the tough circumstances, I think that the workouts are pretty effective,” senior wide receiver Ryan Gilligan said. “It’s been hard, but we’re trying our best to keep in shape with Volt.”

Other teams have been able to meet in person and train together. For example, the cross country team has been trying to arrange socially distant team runs but was deterred by the recent fires and air quality, said senior team captain Jessie Zhou.

For teams hosting in-person practices, one of the biggest obstacles that coaches face is maintaining social distance norms. The boys’ water polo team, which held consistent daily practices during the summer and is planning to hold workshops in the future, has adapted practices to focus more on fitness and less on actual play, as the sport itself requires a high level of physicality.

“We really appreciated the practices over the summer, especially since a lot of us weren’t exercising outside of those practices,” said junior Christopher Wu, a member of the boys’ varsity water polo team. “We had to stay in our lanes though, which was pretty annoying — it felt like I was only going to sessions to exercise, not improve.”

Other teams, like the boys’ and girls’ basketball team, have followed suit and generally aim to work on individual skills in a team setting. In practice, they practice dribbling, individual shooting, and other drills that do not involve direct physical contact with others.

After so much doubt and confusion in the past few months, players are looking forward to some semblance of normalcy in their lives through the upcoming sports season.

“I’m just happy that we have a season,” said Tyler Chu, a captain for the boys’ basketball team. “Even though it’s shortened, our main goal is still to get back to playing games and competing for a league championship.”