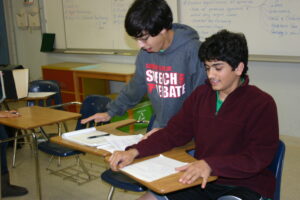 Speech and Debate practiced during lunch before their Stanford tournament

February break was no break for speech and debaters this year since they spent most of the nine days off at national tournaments held at Stanford and Berkeley. But don’t feel sorry for the team’s members since they brought home the best results in those tough tournaments in a decade.

“This tournament was perhaps our strongest yet,” said Kolluri. “Both our speech and our debate teams did very well and we hope to continue this success throughout the rest of the debate season.”
But the team’s success did not stop there. Saratoga travelled to Berkeley from Feb 18-21 to take part in Cal’s annual debate tournament, regarded by the National Forensics League as the second most difficult tournament in the nation. Having spent the majority of the past few weeks preparing for the competition, the team headed into the tournament hoping for the best, yet preparing for difficult opponents.

The speech squad again had a triumphant weekend. Lindholm, Mambanta, Kolluri and Munukutla were successful in their respective events yet again, for the second straight week, by advancing past the quarterfinals. Other notable speakers were junior Sankash Shankar, who qualified to the semifinals, senior David Mandell, who placed 7th in Dramatic Interpretation and junior Viraj Parmar, who advanced to the quarterfinals of Foreign Extempt. In the junior varsity division, sophomore Aneesa Mazumdar placed 1st in Foreign Extempt.

“When they posted the listing of who was advancing to the out-rounds, I saw our school listed in almost every category,” said Extempt captain Parmar. “I was very excited when I saw my name on the list of those who broke and wasn’t expecting it at all mainly because of how tough the competition was.”

In the debate part of the tournament, juniors Ruchie Bhardwaj and Parul Singh took 9th place out of 96 teams from around the nation with an 8-1 record in Public Forum.

“Our kids did exceptionally well at [Cal and Stanford],” said head coach Erick Rector. “I could not be more proud of them. Our speech and debate team has been growing at an enormous rate and the future looks bright. We hope to continue this momentum into the state tournament.”