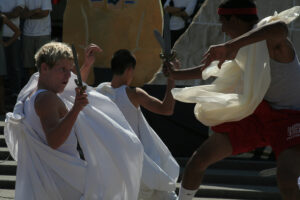 After learning of their tie with the freshmen in decorations, the sophomores hoped to redeem themselves with their quad day dance on Oct. 1, in which they showed Julius Caesar’s daughter getting ready to marry one of several contenders who are fighting for her love.

The sophomores didn’t let their tie with the freshmen bring them down.

To entertain the crowd, they decided to use sophomore Jay Lee as Julius Caeser’s daughter.

“One night someone called me and was like, ‘Jay, are you willing to participate in the quad day dance? Would you like to be a girl?’ And then I got really excited because it’s an excuse to cross dress and get away with it so I said okay I’ll be a girl,” said Lee.

“For effort I know that we definitely tried a lot,” said Mohanty, “We’re going to try and make our quad day the best it can be.”

Lee is overall happy with the way quad day worked out for them.

“I think we did as well as we could have,” said Lee.

“I think they did better than some of the juniors,” said Rees, “overall the sophomores did a really good job.”