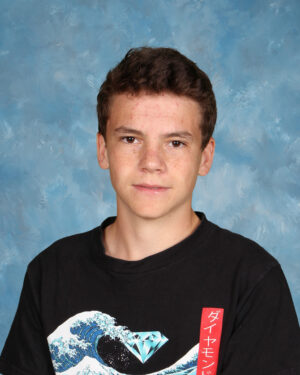 Sophomore Etienne Cassanova knows what it takes to be the kind of soccer player he aspires to be: hours of daily hard work focusing on skills like ball handling, technique and fitness.

Cassanova played midfielder on both the boys’ varsity soccer team and in the National Premier League (NPL), the nation’s second-highest level of youth soccer. Last year, despite being undersized at 5’8” and 135 pounds, he was able to play in the nation’s highest level of youth soccer, the U.S. Soccer Development Academy (DA), and he intends to resume playing in DA next year.

Cassanova’s achievements while playing on the DA-level team, the De Anza Force, are impressive. He has placed at prestigious competitions on both a domestic and international scale: Cassanova’s team is a three-time champion of the Surf College Cup Showcase, one of two top premier tournaments for youth soccer in the U.S, and his team placed among the top 16 in the 2018 Mediterranean International Cup in Barcelona, in which over 280 of the best soccer clubs and teams in the world competed.

Additionally, he was selected twice to represent the De Anza Force in Spain, awarding him the opportunity to play with UE Cornellà and FE Barcelona, both world-class soccer clubs.

“It was just an amazing experience,” Cassanova said. “I was nervous at first, but in the end, it was pretty eye-opening. There they live, eat, and breathe soccer — the players on the ball and in terms of their movement were a lot better than over here.”

Like many other successful athletes, Cassanova says his achievements have resulted mainly from hard work.

“Ever since I was young, I’ve been training every day, even when I’m sick,” he said. “And it’s not like you can mess around during practice; you have to go a hundred percent during training or else you’re not gonna be able to replicate the skills you learn in training on the field.”

For Cassanova, technique is the most important attribute for a player and is what separates him from others; he’s dedicated thousands of hours into mastering his first touch, dribbling skills, and passes. Currently, he’s working on physical fitness and speed with a personal trainer and through additional practices with the boys’ varsity team.

Last year, Cassanova was unable to participate in school soccer because of DA rules restricting players from competing for fear of injury, but since NPL does not have these rules, Cassanova is free to compete with the Falcons. For Cassanova, school soccer isn't necessarily as rewarding as DA — despite Cassanova playing full 80-minute games every match and coming in as the team’s top scorer, the team’s record was only 1-12, a result that he attributed to “lower intensity and grit” compared to other teams.

Despite this, Cassanova said that school soccer helps him manage his time more effectively — he often goes to both school and club practices on the same day, so he has relatively little time to study or do homework. As he came into high school, Cassanova realized that he had to manage his time efficiently to perform his best both at school and on the field, and his increased responsibilities this year have forced him to be more responsible with time management.

“If I procrastinate at all, I’m basically done for,” he said. “I usually get home at around eight, so I don’t have a lot of time to do homework because I want to get a lot of sleep — I try to study and do work during tutorial and lunch so I’m less busy at home.”

In the future, Cassanova hopes to attend an elite university like the Massachusetts Institute of Technology (MIT) or Stanford. Although he would prefer to attend a school with a D1 team, Cassanova says he values academics more than soccer, so he would jump at the chance to play for MIT even though it’s a D-III team.

“I don’t really see myself playing as a pro,” he said. “I’m mainly pushing myself right now because I love the sport; it’s fun to play well and there’s a huge soccer community, so being recognized for your achievements is a really good feeling.”