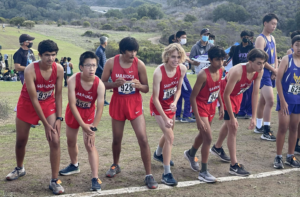 Photo by Kathy Tippetts
Sophomore Tas Long, fourth from the left, prepares to take off in the 2021 SCVAL League Finals at Crystal Springs Park.

Permalink
Even though last year was his first in cross country, sophomore Tas Long has developed a passion for the sport of running and hopes to continue after high school.

When sophomore Tas Long recently jogged down a trail in Sanborn County Park, feelings of rapture filled him as he glanced at the surrounding nature. Although his parents had initially forced him to run as a way to stay healthy, he has quickly developed a passion for the sport.

During the early stages of the pandemic, Long usually ran a couple of times a week to stay fit and approached the sport more as a leisure activity. As his passion and skill grew, however, he began to consider running competitively in high school.

“I enjoy longer runs with nice scenery, like the Sanborn County Park trail runs,” Long said. “They are always very good ways to get miles and you do not realize how long they are.”

In his freshman year, Long decided to join the cross country team as a way to continue his running during the school year.

Under a difficult practice regime that consisted of running between 25 and 35 miles a week, he quickly improved and became one of the fastest runners on the JV team: his 5,000-meter time improved from 22:16 to 20:31 over the season.

After a successful season, Long decided to join the track team in the spring, where his improvement was just as quick as in cross country. Long ran his first mile race of the track season in 5:39, significantly faster than his previous personal record of 6:55. By the end of the season, he improved to a personal best of 5:23.

Even though Tas is only an underclassmen, many of his teammates, including upperclassmen, recognize his running talent and passion and enjoy his presence on the team.

“Tas is an ambitious runner and cares immensely about the team. He helps increase team spirit through his vocality and great sense of humor,” said senior teammate Wasil Khan.

This season, Long will likely be the fastest runner on the JV team. He said he is looking to continue a quick pace of improvement through figuring out new ways to shave seconds off his times.

“I need to improve my mindset and mental toughness,” he said. “I’ve got to push through the pain more during cross country races.”

Every day at practice this season, Long is focused on improving his mentality. His effort and desire to improve was apparent in the 2022 Lowell Invitational at Golden Gate Park on Sept. 10, which was Long’s first race of the season. He clocked a time of 16:41 for the 2.7-mile course, which translated to a 6:11 mile pace, a noticeable improvement from his cross country times in his freshman year.

Long hopes to build on his early-season success and momentum and achieve times that he will be proud of.

“I hope to keep staying healthy and keep improving, but most importantly I need to have fun with the sport and enjoy time with the team,” he said.