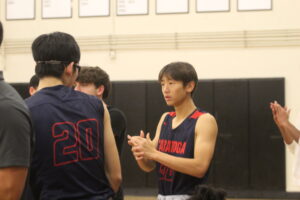 Photo by Allison Tan
During a timeout in a Dec. 8 game against Branham, Steven Ning motivates his teammates.

When sophomore Steven Ning was in fourth grade, he saw himself as overweight and unathletic, and it hurt his self-esteem.

Despite feeling bad about himself, he said he is actually grateful for that time because of the great improvements that came out of it — with the ambition of wanting to become fitter, he turned to the sport of basketball, which significantly improved his athleticism and developed a long-term passion.

When Ning first started, he only practiced once or twice a week, but gradually began to practice more.

“What I enjoy the most about basketball is that it helps relieve stress and it is played at a fast pace,” he said.

Ning decided to begin competitive basketball in fifth grade by signing up for a local AAU team called Next Level Athletes Born2Ball. From there, he found steady improvement in his skills.

“Over the years, I have gotten much more athletic, as I have been getting stronger and faster and improving my vertical jump,” Ning said. “My ball handling skills also have been enhanced, making it easier for me to get around defenders in games. I am happy with the progress that I have made.”

Currently playing mostly on the JV team, Ning still feels that he can get better at sharing the ball with his teammates, but his offensive game is soaring.

Through mid-December, he is averaging 18 points per game. Ning understands that it is more important to share the ball because it gives his team a higher chance of winning games. Ning is also a point guard with traditional duties of facilitating the offense and making assists to teammates.

As for honing his other physical skills, Ning makes it a priority to train hard not only during the season, but year-round.

“In the offseason, I practice for two to two and half hours every day and do strength training workouts a few times per week for an hour,” Ning said. “Strength training is extremely essential because successful basketball players typically cannot be skinny.”

During his training sessions, he incorporates drills for ball handling, finishing at the rim and shooting. Through his strenuous training routine, Ning was able to develop many strengths, including his ability to finish around the rim, basketball IQ and ability to handle pressure.

With his improvements, Ning recently got moved up to varsity to play for injured and sick varsity players. This occurred most recently in a game against Branham on Dec. 8 when he played five minutes and scored 2 points and had one assist.

Beyond this year, Ning hopes that his strengths as a player will ultimately help him get recruited by a college team.

“I am excited to play basketball at the next level,” he said. “I hope that the amount of time and effort that I have put into basketball will pay off.”