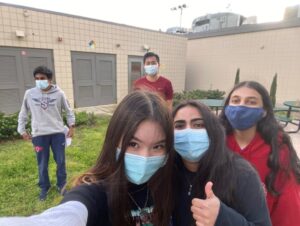 The class office poses for a picture after handing out all their boba orders at the school on March 15.

The fundraiser received more signups than expected, and the class office felt the event was a success.

Boba is back — or at least the boba fundraisers students know so well.

On March 15 from 4 to 6 p.m., sophomore class officers held the first in-person fundraiser since the pandemic began, selling Gong Cha boba for $5 to students in the entrance to the quad. Those looking to buy a boba drink filled out a Google Form beforehand with their name and order: a large passion fruit tea with boba and lychee jelly or a large pearl milk tea.

To advertise the event, the officers—President Allison Tan, Vice President Anand Agarwal, Treasurer Mason Wang, and Class Representatives Noor Khan and Avani Kongetira— made several Instagram story posts and posted a video about the fundraiser on their class Instagram.

The fundraiser accepted payments through the webstore or in exact amounts of cash in person. They emphasized they would only take the exact amount of money so that the officers didn’t have to count out change and have unnecessary contact. All the usual pandemic precautions were in place.

Tan said the class office chose to do a boba fundraiser specifically because they have had experience conducting those fundraisers in the past.

“Because a lot of us had hosted boba fundraisers in freshman class office, we knew what the process was to order and pick up [from Gong Cha],” Tan said. “That made the whole event go a lot smoother.”

While the class office initially aimed to have 50 orders, they ended up getting 54 orders and were glad everyone who ordered actually picked up their drink. In the end, the class office made $143.

The officers took COVID-19 precautions seriously and ensured that everyone buying boba followed these rules. According to Tan, all class officers wore gloves when handing out drinks. They also left two hours for people to pick up their drinks so that they could come in small groups or alone.

“This whole year, we haven’t hosted any in-person fundraisers, so we were really excited to try it out in hopes of doing similar things during hybrid learning,” Tan said. “I was really happy that we got to host the event and give people some sense of normalcy.”