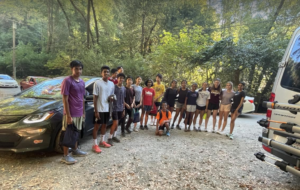 Photo by Kathy Tippetts
After finishing their weekly Saturday long run at Sanborn County Park, the team takes a picture together.

Permalink
After losing strong seniors, the team hopes to surpass their previous successes with a hard training regime.

Recap: Both teams showed noticeable improvements in their race times throughout last season. They were able to use that momentum to place high in CCS, including Harrison Dance, who came in first in the boys Division 3 CCS race and is now running cross country and track for UCLA.

Following a strong season last year, the cross country teams look to continue their success despite losses to graduation and a coaching change.

Additionally, some of the top female runners from last year — senior Elsa Blom, junior Sara Bright and sophomore Hillary Gonzalez — decided not to continue with the sport.

Another major loss was girls’ coach Danny Moon, who retired after coaching the team for 13 years. Ian Tippetts and Kathy Tippetts — the existing head coach and assistant coach of the boys’ team — took over for the girls’ team.

“I think the coaching change is definitely a new atmosphere for the girls team because Moon was more casual than [Ian],” senior co-captain Elizabeth Stoiber said. “With [Ian], the girls can be more competitive.”

Cross country participation has also taken a dip this year, especially for the girls team. Last year, there were 53 runners for the girls, but this year there are only 17.

Nonetheless, both teams are looking forward to a successful season and practicing consistently to accomplish their big goals. Each week, they run 25 to 35 miles over two to three workouts, which include interval repeats, hill repeats and Oregon drills. They also do aerobic (easy pace) runs on recovery days. The longest run of the week happens on Saturdays, and Sundays are typically rest days.

Two days per week, both teams go into the weight room to do strength training targeting the core, calves, hamstrings, quadriceps and hips.

The teams’ first race occured Sept. 10 at Golden Gate Park in San Francisco with the top seven runners for the boys and the girls participating in the race. The boys placed 25th out of 34 teams and the girls placed 17th out of 25 teams. The first league meet is on Sept. 20.

Though every athlete wants to excel in their races, the team’s main goal is to have fun with the sport of running. Once every few weeks, the team meets after practice for fun team-bonding activities.

“We want all of our athletes to be lifelong runners, and we want them to continue to run after they run here at Saratoga,” coach Kathy Tippetts said.