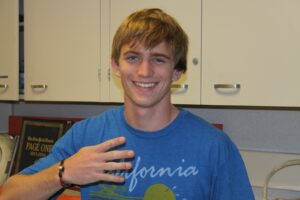 I spent two months of my summer in Costa Rica as an exchange student, and I attended a high school there for one month. Costa Ricans are some of the frendliest people I have ever met, so naturally, I made a lot of friends.

Skype is by far the best way to stay in contact with my Costa Rican friends, since it is as close to talking to them in person as possible while being over 2,000 miles away. Considering that I wish I was still in Costa Rica, I use every opportunity to “Skype” my friends there.

Additionally, the only way that I am able to retain what I learned from my trip is by video chatting in Spanish. There is no comparison between being immersed in a Spanish speaking country and attending a high school Spanish class three times a week though. For example, in Costa Rica, they communicate using the more formal “Usted” form and the “Vos” form, while here, neither of these forms is used very often or even taught. I only get the chance to practice these forms of speech, as well as the teenage vernacular with my Costa Rican friends through Skype.

I’ll just admit it; I am a Skype addict. In the past few weeks, I have spent more time on Skype than I have studying. Skype video chat sessions often continue deep into the night and early into the next morning, including sessions of over five consecutive hours!

Even more pathetic, the most stressful moment of my week was when my computer microphone stopped working. I frantically searched for a replacement in my dad’s office, until I found one. Yet the invention of Skype is genius; it made keeping in contact with my Costa Rican friends so much easier and talking with them that more realistic. What would I do without it?