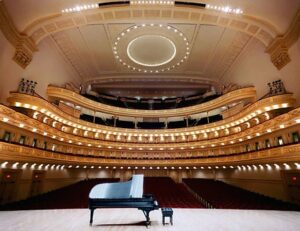 The Isaac Stern auditorium in Carnegie Hall seats 2,804 patrons in its five levels and its uppermost balconies sit loftily 137 steps above the stage.

The Isaac Stern auditorium in Carnegie Hall seats 2,804 patrons in its five levels and its uppermost balconies sit loftily 137 steps above the stage.

Perhaps the most prestigious stage in the world, Carnegie Hall is the home of the renowned New York Philharmonic, site of the debut of numerous works and has been graced by the performances of both classical and popular giants. This is the very stage on which the SHS Symphonic Wind Ensemble and Advanced Orchestra will perform on Tuesday, March 8.

“It’s common for high school groups to play in Carnegie Hall at ‘dark hours’ like 10 in the morning,” music department chair Michael Boitz said. “But to be invited to play as a showcase for an evening concert is a really momentous occasion.”

One hundred and four students from the advanced band and orchestra will be performing on stage and an additional 14 seniors will be accompanying the department on tour to New York. The group leaves on March 5 and will return on March 9.

The tour was organized by World Projects, an educational travel company, as part of their New York Wind Band Festival, which takes place on March 8 during the day.

“Throughout the day, bands and orchestras will be playing and being adjudicated,” Boitz said. “In the evening, all those groups will attend the evening concert, which is part of the schedule Carnegie concert series.”

Originally, SHS was originally supposed to open for the Orange County Symphony, a professional group, but due to lack of funding, the group cancelled its performance, making SHS the evening showcase concert.

“If you go to Carnegie Hall right now,” Boitz said. “You’ll see our name on one of the billboards, and as it gets nearer to the concert date, they move it closer and closer to the center; it’s really quite cool.”

As the featured attraction, the groups will be performing with a solo violinist, Alex Shiazaki an SHS alumni and a student at the Juliard School of Music. Shiazaki and Nan Ashi, a piano performance major at Juliard, will be featured with the String Orchestra, who will then play an additional three pieces. The Symphonic Wind Ensemble will open the concert with four pieces, the first of which will be conducted by assistant band director Seth Jones.

“I was really nervous when Orange County cancelled because I was worried the ticket sales would be low,” Boitz said, “but World Projects told me they’ve had the highest ticket sales since they’ve been running the festival.”

In addition to their performance at Carnegie Hall, both groups will be playing and adjudicated in the New York Bands Festival earlier that day. They will also perform a casual, pop style concert in the Central Park Bandshell on March 7.

The Symphonic Wind Ensemble will have chance to participate in a workshop with Dr. Anthony Mazzafero of Fullerton College and the Saratoga Strings will work with Virginia Allen, of the Julliard School.

The trip is not all work. Students will attend a Broadway show of “Spider Man: Turn Off the Dark” on March 6 as well as a festival dinner cruise on March 7.

“I’m really excited to have this opportunity,” junior saxophone player Vikas Nookala said. “Playing in Carnegie Hall is something we’ll remember for the rest of our lives.”