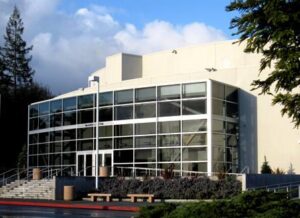 The McAfee Center began the efforts of the SHS Foundation a decade ago.

In the late 1990s, the school could hardly be viewed as a great facility for learning. In fact, Saratoga High had hardly changed its appearance or facilities in its first 40 years.

In the late 1990s, the school could hardly be viewed as a great facility for learning. In fact, Saratoga High had hardly changed its appearance or facilities in its first 40 years.

But because of the passage of a bond in 1998 and the efforts of a parent group called the SHS Foundation, the school is entering a new decade with mostly state-of-the-art facilities such as the McAfee Center, a lighted turf field, quad beautification, advanced technology in updated classrooms, an Olympic-sized swimming pool and a renovated gym, among other efforts. Working behind the scenes, the SHS Foundation has garnered approximately $13 million in order to help fund such improvements.

“The SHS Foundation has impacted the school by providing awareness and funding for critical projects that otherwise would either not be funded or take significantly more years to implement,” said SHS Foundation executive board member Brad Mandell.

The foundation was created when parents started raising money for the completion of the McAfee Center. Ever since, the foundation has been providing a way for parents to indirectly enhance the lives of SHS students by donating money intended to improve the school’s environment and technology.

“We are so fortunate in Saratoga,” said senior Ashswin Siripurapu. “There are a lot of schools that need this money much more than we do, and I almost feel like we’re approaching the point where we’re buying stuff because we can, not because we need to. [Nevertheless], I think the SHS Foundation is really a great thing to have around.”

Five million dollars were raised by the foundation for the McAfee, which was completed in 2005.
This year, despite the recent budget crisis, the foundation remains strong and continues to encourage parents to make donations. Recently the foundation has funded numerous technological advancements, including 30 brand new Macintosh computers for the digital photography/film lab, video projectors in classrooms, smart boards for the math department and servers for the Media Arts Program.

“We have actually surpassed last year’s funding, which continues to demonstrate the commitment that the parents have to enhance the students education,” said Mandell. “We still have less than 20 percent of the families participating in donating to the foundation, and we could significantly accelerate the technology plan for the school if every family contributed.”

Teachers acknowledge that without the significant help of the foundation, their teaching styles and the school would probably be less technologically advanced.

“The projection systems throughout the school have had a direct impact on what teachers teach and how they teach,” said history teacher Matt Torrens. “Six years ago when we had only two teacher-made projection systems, only a handful of teachers were integrating the Internet, PowerPoint and digital video clips into their classrooms.”

the foundation has also upgraded technological efficiency for classes, making information more easily accessible than before. Assistant principal Karen Hyde says that “technology improvements in the library have revolutionized how [SHS] teaches social studies” and predicts that “by going textbook-less, every freshman will rely solely on the electronic resources of the library to get our information.”

Mandell said SHS Foundation has tried to accommodate the needs of students and will continue to adapt to changing educational trends in the future.

“[The foundation] enriches the environment for the students and provides differentiation in programs and tools to better prepare our students for college that otherwise would not happen,” said Mandell.