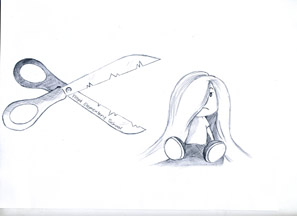 No matter how ridiculous a rule or law may sound to some people, most rules and laws exist for a reason. They help keep society in order and citizens somewhat sane. Rebellion against rules, especially in an elementary school, can cause much havoc and unnecessary publicity.

No matter how ridiculous a rule or law may sound to some people, most rules and laws exist for a reason. They help keep society in order and citizens somewhat sane. Rebellion against rules, especially in an elementary school, can cause much havoc and unnecessary publicity.

An example of this can be portrayed through 4-year-old Taylor Pugh of Floyd Elementary School in Dallas and his parents, who seem to think it’s all right to rebel against their school system and its rules when they come across a rule with any hint of controversy. Unnecessary rebellion is what breaks down societies and establishments, and therefore Pugh and his parents should obey the rules the young boy’s school enforces.

Because of his hair being too long, which did in fact violate the school dress code policy, Pugh was issued a warning to cut his hair or he would be suspended. Pugh refused to cut his hair, and his parents supported his decision, claiming that it’s “not right to hold a child down and force him to do something … when it’s not hurting him or affecting his education.”

Pugh, after being warned, was suspended from his elementary school, infuriating him and his parents. This controversial situation gained news coverage fast, leaving many people shocked that Pugh’s parents are showing their child that challenging authority is by all means OK.

Being a parent comes with responsibilities. It’s been accepted that their main responsibility is to assure that they bring their child up as best they can to become a polite and civil young adult.

By enrolling their child in a school, it’s implied that the parents and student must be able to comply with the rules and regulations the school enforces. Sure, maybe the kid likes his hair long, but the least he could do in return for a good education is follow the rules. If he is deathly afraid of cutting his shaggy hair, then he should just enroll in a different school for everyone’s sake, rather than trying to get the press on their side.

Maybe the rule is a bit ridiculous, anyone would admit, but in all honesty almost every school has their strange and sometimes controversial rules. Students just need to deal with them, and parents need to also take them seriously.

After all, who’s a 4-year-old boy to try and change his school’s rules?