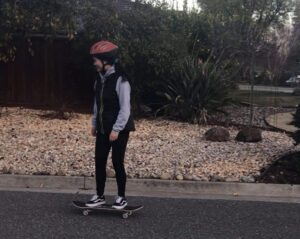 Senior Karen Lei rides her skateboard on a road.

The summer after her freshman year, when senior Karen Lei saw her friend skateboarding, she longed to try the activity herself. But with going to school every day, she never found the time — until recently.

When the college application season ended, Lei finally  began skateboarding. She started in the first week of January, getting comfortable riding downhill. Since then, with the help of YouTube videos, she has started to learn several tricks, like the Ollie, where the rider and board leap into the air without the use of the rider’s hands.

Lei enjoys practicing on a blacktop or somewhere without many cracks in the ground, so she often goes to Foothill Elementary to practice. Even so, learning tricks has been a task of its own.

“Learning several tricks has taught me that you need repetition, repetition and then some falling,” Lei said. ”It definitely takes time and a lot of patience. For some tricks, it might take a couple of months. For others, it may even take years.”

Aside from teaching her to be patient and persistent, skateboarding has provided Lei with a welcome outlet for her stress.

“I’m someone who likes to stay active, and exercising is how I like to de-stress and escape from academics,” Lei said. “Skateboarding is definitely a good way to get outside and get some fresh air and physical activity instead of sitting at my desk all day.”

When she loses her second semester senior status, Lei hopes to skateboard on her college’s campus.

Senior Irika Katiyar, on the other hand, has picked up a less physically demanding activity: knitting. She started her knitting journey during winter break, after finding inspiration from her grandmother.

Katiyar taught herself how to knit by watching YouTube videos. So far, she has made several mini bags and a big tote bag, and she hopes to crochet a blanket soon.

“Knitting has allowed me to not dwell too much on what I’m missing in senior year,” Katiyar said. “It is calming and forces me to stop working and just relax.”

After finishing college applications, Fernandes thought of how she would lose her current accompaniment when she sings in college. With the extra time of second semester senior year, Fernandes’s piano teacher has been teaching her to play piano and sing together.

Fernandes has been focusing on technical singing expertise such as correct breath support and enunciating consonants. She tries to practice every day, working on classical pieces such as “Think of Me” from The Phantom of the Opera and “The Man I Love” by composer George Gershwin. She said if she can master these pieces, pop music will be easier.

Fernandes said singing and playing piano serves as a stress outlet. She enjoys the independence from doing both activities because she doesn’t have to rely on anyone else when she performs.

Fernandes has also picked up songwriting again, which she started in eighth grade but set aside because of the demands of high school. She now composes pop-inspired pieces.

“I enjoy the freedom I get by writing my own songs because when singing someone else's song, I can’t just get rid of certain parts [that I don’t like or are difficult],” Fernandes said.

In college, Fernandes hopes to make an EP — a smaller, more informal version of an album — for her own songs.

“I’ve learned that I should never inhibit myself from anything because I never thought I would be able to control my singing so meticulously and play complicated piano pieces at the same time, but now I can,” Fernandes said.