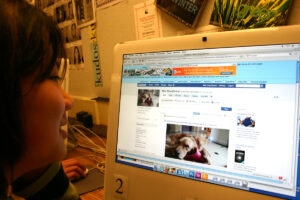 Melody Zhang is one of many seniors who has changed her name on Facebook.

A rumor that colleges and universities will check Facebook profiles and use the information to make admissions decisions has caused several seniors to change their Facebook names to make it harder for colleges to find them.

“[At first], I thought the rumor was true because my friends told me,” said senior Kathy Koo, who changed her Facebook name to Kassie Ko. “Even though it might not be true, I just did it just in case.”

Students have hidden or removed content on their profiles that could give inaccurate or negative impressions. Others have taken steps to change their privacy settings so only their Facebook friends can view their profiles. However, some fear colleges will have administrator access privileges to private profiles. Like many others, Koo believes this would infringe on the students’ right to privacy.

“I don’t think they should look around your pictures and [access your profile],” said Koo. “It’s your own privacy, and they shouldn’t be snooping around and judging people before they accept you or not.”

According to assistant principal Brian Safine, private profiles aren’t accessible by colleges. In addition, few colleges include random systematic checks of Facebook profiles in their process of reviewing undergraduate applications.

“They might look at a student’s online activity if there is something that stands out on their application,” said Safine. “They may follow up to spot-check if it’s something students claim that they’ve done that [colleges] can access online. As far as we know, [most] wouldn’t do random fishing.”

The colleges that do make Facebook checks are private schools with bigger budgets to devote to college admissions. According to an article in the Wall Street Journal by John Hechinger, a survey showed that 10 percent of admissions officers from 500 top colleges looked on Facebook and other social networking sites to evaluate students.

In the end, many seniors see Facebook checking as unnecessary.

“I definitely think colleges are wasting their time looking on Facebook, because most of the time, they can’t even find people,” said Tejas Mulye, a.k.a. Thajus Moolyay. “I think everyone should change their names so colleges will eventually cease using this stupid tactic.”