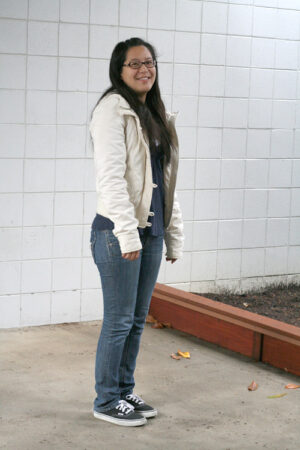 Senior Wendy Mei knew almost no English when she arrived in the U.S. at age 14 but has adapted to her new country since then.

That is what senior Wendy Mei went through during her freshman year. In December 2005, at age 14, she, her mom and older brother left behind everything they were familiar with in Taiwan to move to the United States. Mei’s older brother was starting high school and Mei would be a freshman soon after, so Mei’s mother thought it was the perfect opportunity for a “fresh start” in America.

Then, not even a year after she arrived, Mei went to high school.

“Because the age going into each grade level is different here than in Taiwan, I skipped a year of middle school when I got here,” said Mei. “I didn’t feel prepared at all and could not believe that I was going to high school.”

The first month of school was excruciatingly difficult. While she was trying to adjust to her new life in the U.S., Mei did not have the support of any friends because she went to Hyde Middle School before moving to Saratoga.

“I didn’t know a single person at school and Saratoga did not have a lot of immigrants as opposed to Lynbrook, which was the school I was going to attend, or other Cupertino area schools,” said Mei. Mei’s older brother was attending Lynbrook; however, Mei’s mother moved her children to Saratoga because she felt that there were too many immigrants there. She wanted her children to practice English instead of simply speaking Chinese to their friends.

Mei had many adjustments to make, but the biggest problem was the language barrier because Mei did not attend an international school in Taiwan, and therefore her English skills were limited.

“The hardest part about moving here was definitely [learning] the language, because language is everything,” said Mei. “At first I did not understand anything the teacher was saying, so I had no idea what to do in class. I also could not communicate with people so I could not make any friends.”

This language issue forced Mei to change her study habits. She stayed up until 3 a.m. every day just to complete her homework, not leaving her time to do any other activities. However, her mom and cousin supported her while she studied. Mei’s cousin, who is nine years older than her and who lived at her house at this time, came to the United States when she was in sixth grade. She would not only stay up with Mei in order to teach and explain her homework to her line by line, but would also take her out to dinner and movies to relieve her stress.

“I hated school, but later, I got used to it and everything became better. I made friends and knew what the teachers wanted, and I was not nervous about school anymore,” said Mei. “But without my mom and cousin, I could not have survived the first weeks of high school.”

Aside from her family, Mei believes that having a tutor and teachers were the most helpful in her English learning. During 9th and 10th grade, Mei hired a tutor who not only helped her academically but would have conversations with her to improve her English. She also made a point to attend tutorials regularly and was thankful that her teachers would go out of their way to explain each assignment step by step.

“My teachers definitely helped a lot, especially [English teacher] Mr. [Bill] Peck,” said Mei. “In middle school, I wasn’t in a regular English class so I was nervous, but Mr. Peck would always be patient and stay after class to explain what to do and how to do it.”

By watching TV, going out with friends, and simply communicating with others, Mei picked up American culture quickly and had no problems fitting in. In the years following, Mei adjusted and has improved her English by practicing the language.

“My English is getting better even though it is still not as good as other people’s, but I can understand what students and teachers are saying now,” said Mei.

By taking multiple AP and honors classes, Mei has also challenged herself and feels pressure to do well in them. Though she feels accomplished after completing them, they take up a large amount of her effort, leaving her with little leisure time.

“English 11 honors actually helped me because we did a lot of reading and wrote many essays, so it improved my English to another level,” said Mei. “I have a hard time [with AP, but at the end I still manage to survive the class and I can tell that I have learned a lot.”

Through Mei’s high school experiences, she has learned that friends and family are vital. They support her when she is down, and they are there for her no matter what the circumstance.

Mei believes that high school has changed her in a positive way. Besides helping her improve her English and making new friends, Mei has become a harder worker not just in school, but in everything that she does and realizes that her true potential is much more than she initially sees it as. Also, through high school she has found direction for the future. She is hoping to major in something related in business when she attends college.

“I totally didn’t know that I could survive in such an intense high school and actually get A’s in classes,” said Mei. “I did my best and everything paid off!”