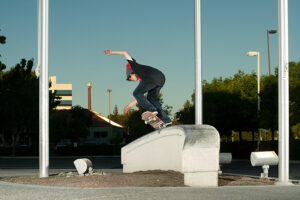 Out of 250 top skaters, senior Mark Suciu placed ninth at the 15th international annual “Tampa Am” competition in Tampa, Florida, in early December. The contest was open to all skateboarders worldwide, and each participant was sent by a sponsor to compete.

“It’s a little ironic to me that skateboarding competitions get the most coverage, because competitions are such a small part of skateboarding,” said Suciu, who does not particularly like contests, and says most true skateboarders share the same anti-competitive attitude.

“Nobody takes them too seriously, and no one is out to be the best,” said Suciu. “It’s a place where everyone becomes friends, skateboards and has a good time.”

Skateboarding became Suciu’s hobby at a very young age. Though at first it was merely a casual pastime he could pick up one week and forget about the next, his interest blossomed when he got the opportunity to watch other local skaters practicing.

“I got to see some difficult tricks up close, and realized that there was so much more to skateboarding than what I knew,” he said.

Since then skateboarding has blossomed into a passion for Suciu, and his skill has improved tremendously, leading him to attend “Tampa Am.”

The contest proceeded over the course of four days. Those who qualified after the first two days moved on to participate in the subsequent semifinals and finals. Suciu ended up placing first out of about 125 skaters during his first qualifying roun.

“I did OK in my first run, but I felt that my second was much better,” said Suciu. “I didn’t fall on any tricks, which gave me time for an extra trick that I was very surprised to land.”

Because of his high ranking during the qualifiers, Suciu got the “Golden Ticket” straight to the finals, skipping the semis. The finals only had 12 skaters remaining, and they all competed with three one-minute runs.

“In the finals, I was skating with skaters that I had previously only seen in skateboard magazines and videos,” he said.

Not only were there hundreds of people at the event, but it was also televised by a local news channel and broadcasted worldwide live on the Internet.

“Since it was focused on such a small group of widely known skaters and my little self, it was extremely nerve-wracking,” said Suciu. “It was really difficult to skate under such pressure, and even though I feel I could have done better in a more stable situation, I’m proud of my performance.”

Every run is an ordeal, since skating is doubtlessly a very risky sport, so Suciu has twisted and broken various parts of his body numerous times; however, he not only does not let this discourage him, but still continues to practice.

Even so, these injuries prevent him from skating at his full potential for a short period of time, but could never deter him from his art.

“This could be easily related to love,” said Suciu. “Nobody stops looking for it after they’ve been heartbroken.”