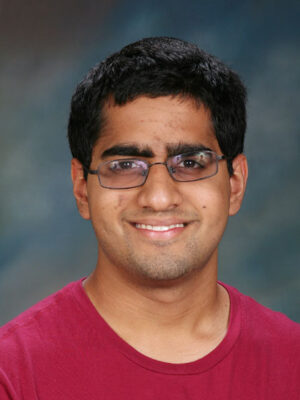 Senior Amol Aggarwal’s road to becoming a finalist in the Intel Science Fair began with a geometry project he was working on: how to find the maximum number of distances in the most efficient way.

Senior Amol Aggarwal’s road to becoming a finalist in the Intel Science Fair began with a geometry project he was working on: how to find the maximum number of distances in the most efficient way.

Alerted to the contest by a mentor in Switzerland, Aggarwal started his research in the summer of 2009. While most other competitors ventured to laboratories to carry out science-based projects, Aggarwal completed his geometric project at his home.

“I got interested because one of the questions in a math competition had something to do with this [subject], so it struck my curiosity,” Aggarwal said.

The competition is a talent search, consisting of students who send their research of various applications in math or science to Washington, D.C. This year, 1,700 seniors from across the U.S. sent their research condensed into essays, which were then reviewed by Nobel Prize laureates, Ph.Ds and other notable scientists. The number of hopefuls decreased to 300 semi-finalists, then to 40 finalists, Aggarwal being one of them.

“Some folks call this the junior Nobel Prize,” Intel headquarters education manager Julie Dunkle said. “They have amazing people judging the projects. They’re all experts in their fields, so you know the work that he did is significant.”

Dunkle and Mark Pettinger, an Intel spokesman, stopped by the school Jan. 26 at lunch to congratulate Aggarwal. In the teacher’s lounge, Aggarwal received a huge cardboard boarding pass for his flight to an all-expenses-paid trip to Washingon, D.C., where the final stages of the competition will be held for a week in March.

“Of course it’s a great honor; it’s needless to say that it’s one of those things where people have won in the Superbowl of science,” said Alok Aggarwal, Amol’s father. “We’re very proud of [Amol].”

Dunkle said that once Amol lands in Washington, he will be given $1,000 for being a finalist and as much as $100,000 if he wins first place in the competition that will carry out its final stages in the National Geographic Society Building.

“He doesn’t get asked questions [there] just about his project,” Dunkle said. “He’s going to have judges come by and ask him questions about all areas of science and beyond science; it’s a little more encompassing.”

After displaying his project under this high pressure environment, Aggarwal will also get the chance to incorporate his work in politics.

“He’ll go down the hill and visit some Congress people,” Dunkle said. “And in some of these meetings with the Congress, they’ll really sit down with him and ask what they should be doing in the science education.”

Aggarwal will wrap up his week in D.C. with a black-tie gala at the Smithsonian Museum with all the other finalists.

“It’s going to be pretty neat seeing everyone coming together, interested in math and science,” Aggarwal said. “I’m looking forward to meet everyone. Washington, D.C., is definitely really cool.”