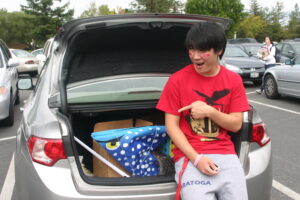 Senior Anthony Sutardja’s car at first seems childish. After all, it contains stuffed animals, Winnie the Pooh stickers and kites. However, Sutardja’s car is far from a toy store. His car also hoards other eccentric belongings such as extension cords and band-aids.

Sutardja says there is no real meaning to all the things in his car other than for enjoyment.

“It’s always fun to keep stuff in the car because sometimes [my friends and I] get bored and don’t know what to do,” said Sutardja.

He and his friends often go to the dollar store and pick up things they think are interesting. Sutardja’s grey 2009 Acura TSX holds a variety of things such as a “Hamtaro” stuffed animal, a cardboard rainbow and various plates of plastic armor. Sutardja even has a biodegradable spoon in his car from whole foods.

“I was going to bury [the biodegradable spoon] and see [if it was biodegradable], but I never got to it,” said Sutardja.

Most of the time, Sutardja says his friends think his things are pretty funny. His friends often play around with the various masks and toys in Sutardja’s car.

“Usually my friends are like, ‘Wow! What’s that?’ and they’ll play with it and think it’s super cool,” said Sutardja. “It’s just a fun way to pass time.”

Sutardja’s favorite thing out of all the items in his car is the plastic sword in the back of his trunk. He thinks that it is the coolest thing in his car because it lights up.

Even though Sutardja has no deeper reason for all the things in his car, he feels as his collection of random stuff is another way to express himself.

“I’m not really allowed to paint the walls in my room or really have fun with it,” said Sutardja.

He says his parents are more of the strict type and would rather have clean, white walls in his room. Sutardja works around this and tries to find other ways to be himself.

“My parents don’t really let me decorate my room the way I want to,” said Sutardja cheerfully, “so I guess I just decorate my car.”