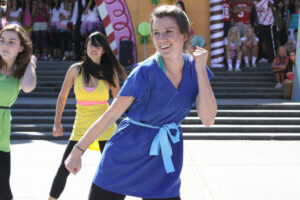 The Saratoga-Los Gatos football game on Oct. 22 was one of the most exciting events in years. With packed bleachers and a roaring crowd, the atmosphere at the game was electric. In front of the bleachers, a group of bare-chested, red-emblazoned students led the crowd in cheering by chanting and yelling, encouraging fans to get into the game.

Named Code Red, this exuberant club was formed by seniors Greg Johnson, Kevin Darchuk and alumnus Alex Wokas in late 2008. With its 162 members, the group is an example of the school spirit formed by the senior class, who have been bringing passionate ideas to the school for the past three years.

Guidance counselor Eileen Allen, a Saratoga High alumnus who went here a decade ago, commended the group for its ability to inspire fans.

“We didn’t have anything like that when I went here,” she said. “Especially at the LG game, they were able to pump up the crowd and get everyone on their feet.”

Code Red member Tim Lycurgus thinks the class of 2011 is the most spirited class the school has seen in years.

“Many seniors go to the sporting events and are much more into school events,” said Lycurgus.

Not only has the senior class produced Code Red, but they also pioneered the now-extinct Thursdays, a tradition where one day of the week when participants would dress according to a weekly theme. At the LG Game, the group of students painted letters on their bare chests, spelling out “BEAT LG!” and “LETZ GO TOGA,” influencing some sophomores and juniors to join them.

Sophomore class president Amin Mirzadegan, one of those who joined the seniors in chest-painting, agrees that the seniors are a big contributor of the renewed school spirit.

“We see them doing that type of stuff, and they’ve always been spirited and it has definitely rubbed off on us,” said Mirzadegan. “I admit that last year we didn’t have much spirit, but we improved a lot this year by following in the seniors’ footsteps.”

The sophomore class isn’t alone in admiring the senior class’ spirit. Freshman Tony Capek came to Saratoga without true first-hand experience of school spirit. After experiencing his first Homecoming, however, Capek is trying to make his class more spirited, thanks to the senior class.

“We weren’t really sure what to do before seeing the seniors’ Homecoming,” Capek said. “I think now we are going to have a lot more spirit and we’re going to step it up.”

The seniors believe their strong spirit will continue to influence the school for the next few years.

“Our legacy will last a long time because we’ve started a trend of school spirit. I think the sophomores this year in particular are going to follow our lead and will bring a lot of spirit to SHS in the future,” said Lycurgus.