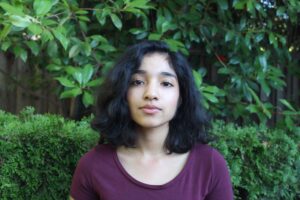 In mid-July, senior Manasi Garg ran toward the ringing phone, ready to greet the news. Although she already knew what news the phone call would likely bring good news, her hands still shook in anticipation.

After a few minutes of back and forth on the line, Garg finally hung up the phone with a huge grin on her face.

It was official: She was named the 2020 National Student Poet (NSP) of the West.

According to the Scholastic Art and Writing website, “The National Student Poets Program — a collaboration of the Institute of Museum and Library Services and the Alliance for Young Artists & Writers — strives to inspire young people to achieve excellence in their own creative endeavors and promote the essential role of writing and the arts in academic and personal success.”

This year’s five NSP finalists were selected from a pool of more than 30,000 submissions, making the program acceptance rate substantially lower than that of top universities like Stanford and Harvard. In early January, when the general Scholastic Art and Writing awards were announced, Garg was notified that she had been selected as one of the NSP semifinalists. In order for her to move through the next round of applications, Garg had to submit a portfolio of 4-5 poems and a self-introductory video.

Garg’s portfolio consisted of five poems: “tonight, alone, in the queens apartment,” “Cutglass,” “1991,” “Neruda” and her favorite, “Everything We Left Behind.”

Driven by her family’s experiences and stories, Garg wrote “Everything We Left Behind” to explore the effects of the Partition in India.

“[Partition] triggered this wave of riots, mass violence between different religious ethnic groups, and mass migration. Women, who were unfortunately seen as “symbols of honor” were often raped or abducted,” Garg said. “Sometimes men would kill their wives, daughters, sisters, and other women in the name of preserving their family and community’s honor.”

Standout lines from the poem include: “I picture a thousand Ophelias: their white dresses/billowing/the river water scything their breathless skin in/rivulets, their heads/bobbing up and down Ravi River like a string of pearls.”

Garg said she wrote the poem not only as a way to navigate her family’s experiences, but also as a way to try to commemorate the seemingly forgotten experiences of those that suffered at the hands of Partition.

“Partition was one of the largest events of human misery in history, but it feels like there are so few recorded stories and pieces of literature on it,” Garg said. “I wanted to capture certain aspects of it, tell that story in some way for those women and for everyone hurt by Partition.”

Despite the prestige surrounding the program, Garg’s immediate reaction to honor was being excited that she would be able to work on a literary service project as part of the organization.

“One of the main components is your service project, which can happen anytime during your year of service until August and be as large or small as you want,” Garg explained. “Examples of past service projects include hosting poetry workshops in communities that don't have as much access to literature and poetry.”

Although she is still in the process of brainstorming potential service projects, Garg said that she has already thought of a few projects she would love to tackle. Even with all the excitement, Garg said that the reality of the honor still hasn’t fully sunken in.

With the announcement of the National Student Poets, Garg’s name appeared in well-known newspapers and multimedia journalism outlets like the New York Times, Washington Post and Los Angeles Times. Garg said that such coverage only made it harder to believe that she was actually a National Student Poet.

“Whenever I would see the news, I felt like I was looking at my doppelganger,” Garg said. “Like, she looks familiar. She has my face. She has my name. She lives where I live. But even then, she can’t be me. I just haven't internalized it yet.”

Garg also mentioned that she felt like the media attention also widened the “chasm” between her self-perception and the way others see her, heightening her sense of self-cognitive dissonance.

“I have this set perception of myself, where I'm just a 17-year-old that’s living her normal life, but then I guess there's this other, larger perception of me that other people have once they see my name and picture on the news,” she said.

Like most writers, Garg said that she started writing at an early age.

“When I was in kindergarten and first grade, I was obsessed with Taylor Swift, like most little girls were at the time,” Garg laughed. “So the first ‘poem’ I wrote was actually a song about my ‘sadness’ over some non-existent boy who was on a date with another girl.”

Garg said that as years passed, she strayed from emulation and started to channel her own voice. A pivotal moment in her writing journey was when she attended the Iowa Young Writers’ Studio (IYWS) in the summer of 2019.

“Going to Iowa was the first time where I was surrounded by people who not only enjoyed poetry, but were very comfortable in their enjoyment of it,” Garg said.

In addition to being unapologetic in her poetry, Garg is also known for her outspoken and fearlessly opinionated mind-set. She attributed the progression of her personal voice to her experience in spaces such as the speech and debate club, where youth are encouraged to be confident and open about their thoughts.

“It made me realize that even though I’m ‘just a kid,’ I'm still intelligent and hardworking enough to understand complex situations like geopolitical relationships,” she said. “I don’t do speech and debate anymore, but it was essential for catalyzing my growth as a person who is striving to be comfortable in who she is and what she believes.”

In addition, Garg said that recognizing her own capabilities also came from realizing that — contrary to what a lot of children are taught — adults are not always monolithically perfect and that young people are not too far off from adult thinking.

Garg said that she is excited to take her ideas with her during her NSP service projects.