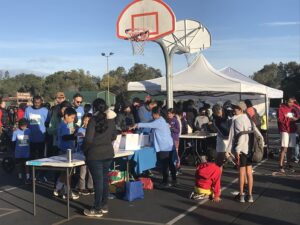 Photo by Victoria Hu
A crowd gathers on the blacktop before the 5K for packet pickup.

Permalink
The 5K and post-race festival, held at Redwood Middle on Nov. 6, had over 800 signups.

As the opening beats to “Believer” by Imagine Dragons echoed across the Redwood Middle blacktop, a bustling crowd gathered at the lower field. Wearing blue T-shirts and race bibs, runners of all ages stood under a metal archway, prepared for the signal to start.

At 8 a.m., the race began: Over 800 students, parents and community members began sprinting, jogging or walking down Allendale Avenue.

This marked the start of the 5K “fun run” race on Nov. 6, the first community-wide fundraiser hosted by the Saratoga Education Foundation (SEF), an organization which funds education enrichment programs at Saratoga elementary and middle schools.

While sheriff’s deputies regulated traffic on Fruitvale Avenue and other streets to yield to the long trail of runners crossing the road, participants ran through a roughly 3.1-mile route starting from Allendale Avenue, looping through Harleigh Drive and other neighborhood roads and finishing on the Redwood track.

Following the race in the morning, the day-long event included a post-race festival lasting until 1 p.m. at Redwood with events such as a kids’ dash, Saratoga Chamber of Commerce Ribbon Cutting Ceremony and a music showcase by second and third graders. Food and entertainment was provided from food trucks like Tea Up, Pav Bhaji Hut, Tlaxico’s Pizza and Luv’s Brownies and Coffee as well as race awards, a hired DJ, carnival games, henna painting, bracelet-making, face painting and raffle drawings with prizes such as tickets for Saratoga High’s production of “The Crucible.”

According to event co-chair and SEF Redwood site representative Vidya Vineet, the event saw high participation. Though the planning team initially expected a maximum of 500 people to show up, over 800 participants ended up registering for the 5K run and over 50 for the kids’ dash.

“It was such an overwhelming response,” Vineet said. “It’s the first time we’ve hosted an event like this and we’re blown away by the number of people who have shown up to support us.”

Vineet said that the success was the culmination of planning over the course of three to four months with the help of over 100 student, parent and teacher volunteers. Though SEF had previously organized RMS’s yearly jogathon, coordinators noticed that it was usually limited to middle school students and their families because it took place during school hours. As a result, they hoped to plan a district-wide event that would bring more visibility to SEF and involve more of the Saratoga community.

“We have been talking about doing a district-wide community event for quite some time because we haven’t had an annual tradition,” she said. “We really felt that is something we should do because it’s a great way to build community like how the PTAs build community at the schools.”

Vineet said that the helpers’ “turnaround time was so quick” that organizers themselves “were amazed.” SEF reached out to the city’s permit department and the sheriff’s department to help reroute traffic on the day of the event and arrange for parking space in West Valley College.

They also enlisted the help of professional race course planning from On Your Mark events to set up the route as well as the start and finish line metal archways.

“We had multiple challenges navigating such a first time event,” Vineet said. “We kept safety the highest priority and designed it thoroughly and efficiently to scale up but had no idea we would hit such high numbers right at our inaugural event. It helped that we were ready and could accommodate the huge community interest.”

For the event, SEF received about $15,000 of funding from business sponsors such as Givens Group Real Estate, Farmers Insurance Chuck Page Agency, Embrace Smiles Orthodontics, Christy Pak from 8 Blocks Real Estate, Berkeley Communications, STEM Ed Innovators from the Jhumki Basu Foundation, Mandala Indian Cuisine, McElhone Group of Realtors and Dr. Allan Pang from the South Bay Kids Dentistry, who were featured on the back of the event T-shirt.

Net proceeds of $18,000 will go toward providing enrichment programs such as art and music for the three elementary schools and one middle school in the Saratoga Union School District (SUSD). As a 501(c)3 nonprofit organization, SEF pays for programs such as enriched P.E. through the company Rhythm and Moves at the elementary school and the STEM program and Makerspace at Redwood — the SEF focuses on classes during school hours while PTA typically targets after school clubs. Vineet also noted that SEF has a higher fundraising target because it supports the salaries of 13 teachers and aides who run the enrichment programs.

“We want more hands-on activities, not just lecturing — we want learning by doing. That is our main goal and our passion,” Vineet said. “The reason why parents spend all this time is because we really believe in having outstanding education in our schools and programs that go beyond what the state mandates.”

Volunteers for the fun run arrived at RMS as early as 4 a.m. to set up brightly colored tents and tables on the upper and lower blacktops for packet pickup, festival booths and a small stage for race awards.

During the run, volunteers also cheered encouragement to sweaty runners and blew bubbles for those — old and young alike — crossing the finish line.

Saratoga city mayor Tina Walia called the event a “big step forward” in bringing the community together after two and a half years of isolation during the pandemic. Standing among the throng of people, she noted the “positive team spirit” and high energy of the crowd.

“Saratogans love to be outdoors,” she said. “We love to walk, we love to run. People are out here just to be together. It has been fabulous this year to have outdoor events because people have been able to meet each other in a very safe manner.”

Walia also commended the effort that SEF organizers put into planning the race, saying that she admires all of the people who put in hours of work to put the event together from scratch.

“It’s a great success,” she said. “This event has parents, children, seniors who don’t have children in schools — it brings everyone together.”