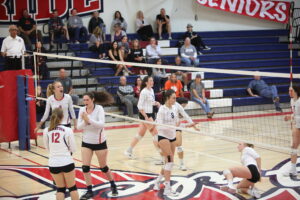 2017-2018 recap: The Falcons finished at the bottom of the more competitive De Anza League.

Senior captain Katie Hulme said the team underperformed last year but is ready to bounce back this year.

“This year, if we can improve our serve-receive-passing and have better connections between setters and hitters, we’ll be a lot more successful,” Hulme said.

She also mentioned that since they have dropped to the El Camino Division, the Falcons will be matched up against less competitive opponents.

However, the team will have to develop some of its younger players. Having lost almost all of their starters from last year, they are now trying different lineups, mixing around the eight new players as well as the six returning varsity players.

“We’re trying to integrate our new players into the team,” Hulme said. “We began the season by putting players in multiple positions. Now that we’ve been playing for several weeks, and we’ve had a couple games, everyone pretty much has a set position, so they can focus on  their specific role.”

Hulme also said that the team has practiced a lot and played many games during the preseason.

“Our coach (Chiou) did a great job of scheduling preseason games against much tougher teams than we will be playing in our league,” Hulme said. “So hopefully we will be well prepared.”