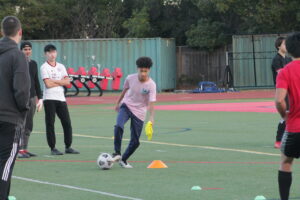 Permalink
The boys’ soccer team struggles to make up for a lack of players.

Recap: The Falcons finished third in their division and did not advance to CCS.

Over 40 players showed up for the boys’ soccer team tryouts, which lasted from Nov. 1-7. Most players were underclassmen, many of whom were recruited onto the varsity team due to a lack of returning juniors.

The team spent tryouts practicing various drills including footwork and passing. In addition, they dedicated a large portion of the time to building strength and endurance through calisthenics and long-distance running.

Senior captains right back Dylan Sinton, right wing Taylor Wilson and goalie Nathan Lim noted that because many players have not been active in club soccer outside of school, the primary challenge was getting in shape.

Sinton said in order to achieve their goal of placing first in the El Camino Division and advancing to CCS, the Falcons must refine their offensive strategy from the previous year and promote better team work.

“Last year, we relied on a single player to really drive the ball, and often the situation didn’t play as well as we hoped for,” Sinton said. “Right now, we’re sharpening our offensive players to cooperate, which in turn should alleviate the burden on any single player and allow us to score more goals.”

Despite these challenges, Lim noted that there is a strong camaraderie among players which should enable them to push forward. As for the captains, Lim mentioned that their main task at the moment was to identify the key strengths of the players and determine positions for them.

“The start of the season is absolutely crucial to the success of the entire season. We’ve made significant progress in the past few weeks, and we’re very satisfied with our current momentum,” Lim said.