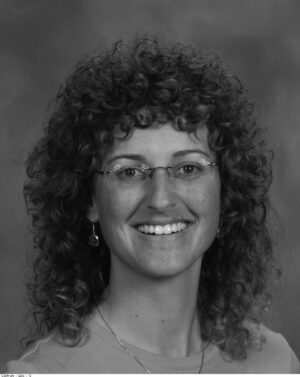 “Don’t laugh when you see the pictures of me and my big hair,” cautioned science teacher Lisa Cochrum.

Thus began a trip down memory lane to Palo Alto High in Palo Alto, Calif., circa 1988. In many respects, the high school that Cochrum attended was very similar to high schools today. However, academics in the 1980s were not as emphasized as they are. Still, Cochrum took every opportunity to study science, her biggest interest and current career.

“I was a big science nerd, and took every science class they offered,” said Cochrum, “but not an AP class. I never, ever took an AP class.”

Although she has gone through a few physical changes since high school, like a more tamed hairstyle and smaller glasses, Cochrum has maintained her vibrant personality and her well-known sense of humor.

“According to my friends, they remember me being funny,” said Cochrum. “I couldn’t have told I was funny. I was never popular, ever!”

Another aspect of Cochrum’s high school that may differ from today is the authoritative power of upperclassmen, which was more dominant then than it is now.

“On campus there was [a] wall that you got to sit on if you were a big fancy senior,” said Cochrum. “I would actually go completely around the other side of campus to avoid that wall because I was afraid of the jocks, even as a senior.”

Cochrum described her high school self as a “choir nerd.” She was in the school choir and was accepted into the Madrigals group as a senior.

“We dressed up in 14th and 15th century clothing, and we sang songs from the 14th, 15th and 16th centuries,” said Cochrum, referring to Madrigals. “And right around Christmas season we would have a high tea, and we would sing Renaissance Christmas Music. We would sing in the malls, and department stores, and big fancy christmas parties in the hills of Palo Alto. Choir made high school for me.”

Outside of high school, Cochrum spent a lot of time with her youth group at church. On any given weekend, she could be found doing something with them, frequently eating lunch with her girlfriends, taking weekend trips to the beach, water skiing and just having fun. During the winter she transformed into a champion Broom Hockey player. On one such winter her friends dared her to go ice blocking, sledding with a block of ice, on the Saratoga Country Club’s lawn.

“I insisted that they take me right home because I said that someday I was going to be a teacher. And if I did this I would be arrested, and you can’t become a teacher with something on your record,” recalled Cochrum.

So while the Cochrum today may be louder today than she was as a student, she is much the same person as she was in high school. Her classroom is by the choir room, she still cracks jokes, and she still enjoys science.