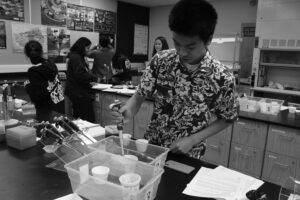 In science classes, every lab experiment requires a list of materials, which can include anything from standard beakers to accurate micropipettes.

According to physics teacher and head of the science department Kirk Davis, the department receives an annual average of around $20,000 from the school and district to purchase new equipment or to replace frequently used or old materials. The amount of money the department gets depends on the number of science sections being taught and is then allocated to each teacher according to the number of classes they teach.

In addition, the department also gets a portion of their funding from the PTSO in the form of grants.

Price: According to chemistry and AP biology teacher Cheryl Lenz, each piece is approximately $4 to $5. The amount spent on replacing glassware each year varies; however, glassware is typically not a major source of spending for teachers, since they may only have to order a new class set of glassware after several years of use.

Description: Glassware, such as test tubes, graduated cylinders and beakers, are primarily used in chemistry and biology classes to store solutions.

Labs: In most experiments from any science course, handling and measuring solutions requires the use of glassware.

Description: While microscopes are expensive, they can last a long time and are mainly used to view small objects or organisms in biology experiments and labs. The department also has a number of dissecting microscopes, which have a lower magnifying power but can be used to study the surface features of a specimen.

Labs: Microscopes are most commonly used in biology classes. For example, students use microscopes in AP Biology to observe plasmolysis and diffusion in onion cells.

Description: A spectrophotometer measures the transmission or reflection of different wavelengths of light in comparison to the intensity of light from a standard source.

Lab: To measure the concentration of a solution, students in chemistry classes may use spectrophotometers to find the molarity of an unknown solution using the wavelengths of given solutions and analyzing the graphs.

Additional: According to Davis, spectrophotometers were recently purchased when chemistry teachers wanted to organize a new lab to teach students about the concept of serial dilutions.

Description: Unlike normal pipettes, micropipettes — which are primarily used in chemistry and biology — are more precise, measuring and transferring less than 1 milliliter of liquids at a time.

Labs: Micropipettes are commonly used in biology labs to extract DNA from organisms and transfer small amounts of solutions.

Price: The department recently purchased some new Smartcarts that have Bluetooth capability to connect to computers. Each wireless Smartcart costs about $200 and 16 of them are needed for a physics class to run a lab.

Description: PAScars are low friction cars that have a spring plunger, magnets and velcro tabs for collision studies. They can connect to software programs to record the data collected from the cars’ movements.

Labs: These cars are used in physics labs to observe the relationships between force and acceleration, as well as the effects of elastic and inelastic collisions. According to Davis, the department is migrating to as much wireless as possible for the labs that currently use USB connections and has been able to purchase Bluetooth wireless cars that are easier for students to use.

The department stores all of its equipment in the central storage area in the middle of the science building. Next year, the science department will receive a new science room inside the 900 wing, so it have been purchasing some of the larger and heavier pieces of equipment that can be stored and used in the new classroom.

For labs and experiments, the department frequently needs to purchase multiple pieces of the same equipment. While there are individual pieces of equipment that are extremely expensive, such as the Van Der Graaf generator and biotechnology equipment, the cost of all other equipment ultimately consumes the majority of the department’s funding.

In an average year, the department also spends a fraction of its money to replenish any disposable materials, such as pigs for the biology dissection lab, chemicals used in chemistry labs and consumables used in earth science labs and demonstrations. The department will also occasionally need to upgrade or replace pieces that may last longer, such as centrifuges, power supplies, hot plates and pipettes.