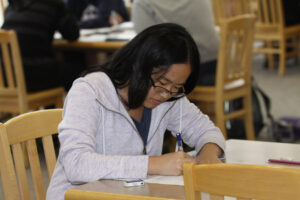 Students took a test Dec. 7 in hopes of being on the Science Bowl team.

On Dec. 7 at tutorial at the library, 14 students furiously scribbled away on their papers, nervously watching the clock tick down in front of them. However, they weren’t struggling the finish a last-minute homework assignment or study for a test. Instead, they were trying to figure out the answers to questions including, “What is the most common name for the polymorphonuclear leukocyte?”

This was just one of the questions of the timed 20 question exam, which students took in order to try out for the school’s first official Science Bowl Team. Eight top scoring students will be chosen to participate on the Science Bowl Team, which is being hosted through the newly formed Science Club.

“There is such a high level of interest in science in our school,” said senior Science Club co-president Daryl Chang, “but there aren’t too many ways to get involved in science outside of class. Science Bowl is a really popular event at most schools so we wanted to create a team here.”

Science Bowl is a nationwide quiz competition sponsored by the U.S. Department of Energy, in which students must answer a wide range of science-related topics ranging from astronomy and botany to computer science and physics.

“Since we had more people interested in participating than available slots, we decided to have tryouts for slots,” said Chang.

After tryouts, students will start preparing for the team’s first tournament on Feb. 27 at Stanford University. Students will attend weekly practices coached by Nakamatsu as well as and will have to study on their own.

“Science Bowl is basically a competition of knowledge, so a lot of the preparation involved self-study and learning,” said Chang. “However, the knowledge isn’t useful if you don’t have speed. So we’ll do a lot of practice rounds with buzzers, so that we can think fast on our feet.”

In addition to Science Bowl, the Science Club is also participating in several science fairs. In November, club co-presidents Chang and Venkataramana were named Regional Finalists in the 2010 Siemens Competition in Math, Science and Technology. Venkataramana traveled to Caltech on Nov. 14, for the Regional Finals Competition, where he presented his research on the regulation of autoimmune diseases and was awarded a $1,000 scholarship. On Nov. 21, Chang presented his research on dental pulp stem cells at the Regional Competition at Carnegie Mellon University, where he was also awarded a $1,000 scholarship.

The club is currently preparing for the Synopsys Silicon Valley Science and Technology Championship in February, where several students will be presenting their original research projects. In order to help inspire students to come up with science fair project ideas, the club is hosting speakers from Stanford’s Chemistry Department to come speak with students on Dec. 15.

“We have a lot of interest and participation this year, so I think we have a lot of potential to do well in both the science fair and Science Bowl,” said Chang.